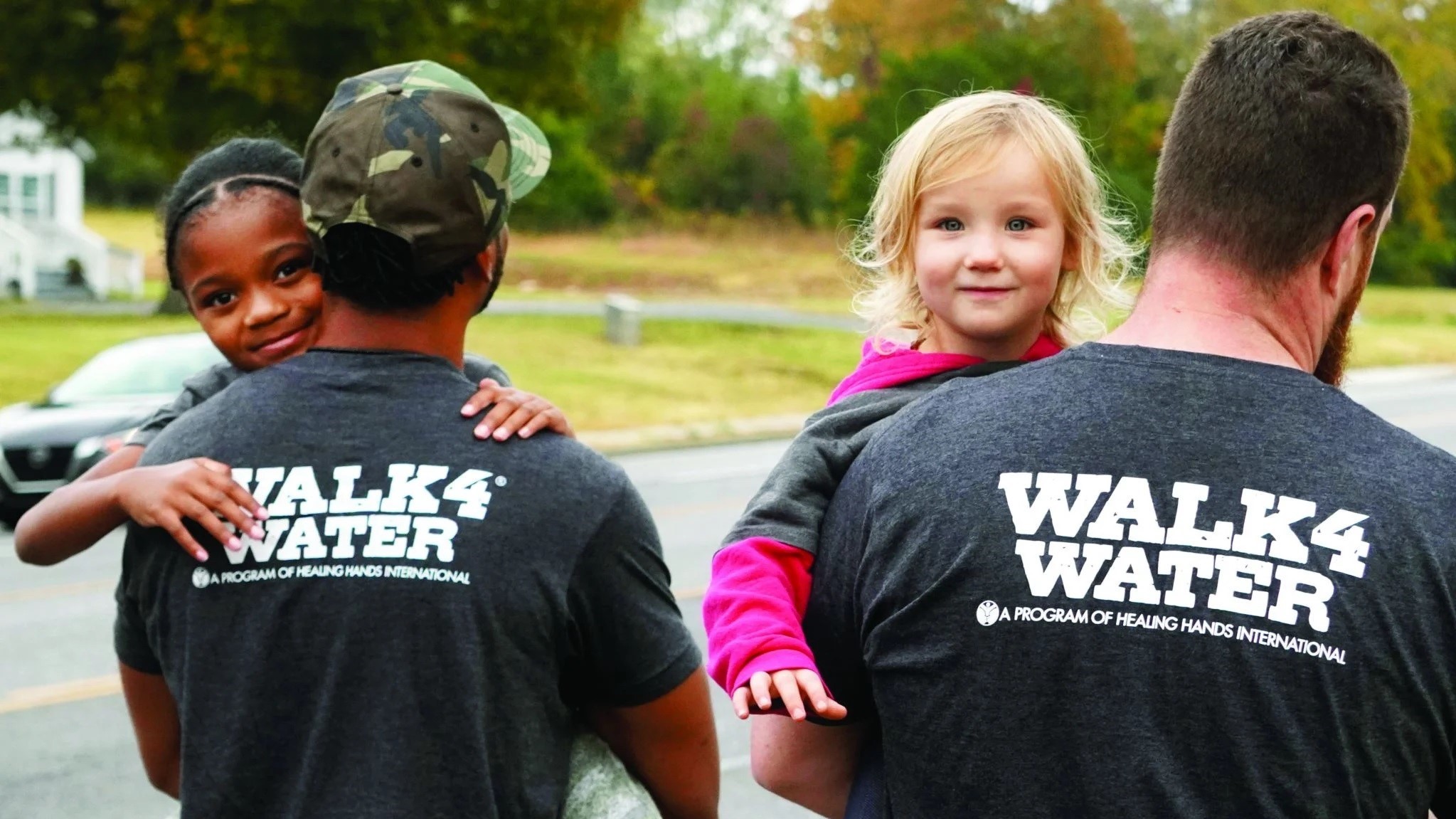 Feet slapped in puddles on a rainy Sunday afternoon as nearly 1,000 people gathered in Smyrna, a small town in Middle Tennessee.

They didn’t focus on water from the sky, but on raising money to build wells for developing countries around the world.

In doing so, they set a record.

The eclectic mix of church members and parishioners who walked the slippery streets of Smyrna — a community of 56,000 people about 20 miles southeast of Nashville — raised $60,000 for Healing Hands International.

The recent fundraiser attracted the most participants ever for a Walk4Water event benefiting the Nashville-based Christian humanitarian aid organization.

This month, give The Roys Report a gift of $30 or more and receive a copy of Wounded Faith, edited by Rev. Dr. Neil Damgaard. To donate, click here.

Greater Together, a group of Nashville-area churches that organized four immersive multi-church worship events this past summer, coordinated Walk4Water. The event followed a similar format to Healing Hands fundraisers hosted by churches across the country.

Walk4Water raises awareness of people in other countries who walk nearly four miles to fetch water, said Healing Hands coordinator Sean Judge. Hikers donate and inspire others to donate to the Department of Well Drilling in Africa and other continents.

At the Smyrna event, participants could run the full four miles or choose to run shorter distances.

“Welcome to the biggest Walk4Water in Walk4Water history,” Judge told the cheering attendees in the parking lot of the Smyrna Church of Christ.

The largest migration before Smyrna took place in Paducah, Kentucky in 2015 when 677 people participated. The Greater Together Walk broke the record with 933 participants, Judge said. Healing Hands launched Walk4Water in 2007.

“That’s what we want to see across the country,” Judge told the enthusiastic crowd. “We want people to come together not only to improve life around the world, but to show that we are one community.”

The Smyrna event far exceeded the original target of $15,000 and two drill holes. The $60,000 raised will fund eight wells.

Aaron Tremblay, pastor of Smyrna Church, described the march as the next step in the growing collaboration of six Nashville-area congregations.

“All our elders and we as ministers all agreed that this must continue. … We’ve got to ride the wave somehow,” Tremblay said. “What could we do together that would have a tangible outcome and involve us all? One of the first things that popped up was Walk4Water.”

Eager to choose the best site, ministers chose Smyrna — centrally located for many of the walkers and an easier place to organize a walk than Nashville, the leaders said.

Tremblay praised the collaborative spirit of his fellow ministers. There was no squabbling over the location or who would get the fame.

“We don’t care whose church it’s in,” Tremblay said. “It’s not about churches getting the recognition. It’s about God getting the glory.”

After the group made the decision, the Minister of Smyrna met with city officials to determine the route. While Walk4Water events often take place in parks or in wooded areas, Tremblay wanted a more central location.

Tremblay suggested to Smyrna City Manager Brian Hercules a route that would start and end at a prominent park, not the church, hoping to avoid the impression that the walk was for church members only.

Hercules turned down the proposal, concerned that using the public park would set an unwanted precedent, Tremblay said. But the city manager has come up with an alternative.

“They trusted me… and it worked out very well, and here we are in their church,” Hercules said. “It’s a great event. … Look at this crowd and the diversity of our community coming together.”

City officials weren’t the only people supporting Tremblay. He did a 45-minute interview with a local radio station about Walk4Water and spoke about the event at the Rotary Club. The junior ROTC program at nearby LaVergne High School provided cadets to help police with traffic control.

Local businesses displayed posters and some signed up to take part. A convenience store hung the Walk4Water flyer directly under a beer sign.

Growing out of informal meetings between clergy, Greater Together has seen many multi-ethnic area churches come together, with Churches of Christ alongside congregations of other denominations.

Some of the churches have a significant percentage of white, black, and Hispanic members. The Jackson Street Church of Christ is predominantly black.

Tusculum Chancellor Mark Adams grew up in Nashville, but has it I have only been in the congregation since January 2022 after returning to Tennessee from Texas.

“All the other people are from other places, and none of us have been in our existing congregation that long,” Adams explained, “and so they don’t have any assumptions or baggage for them, why we couldn’t do anything together.”

The organizers saw the Greater Together Walk4Water event as not only a way to raise awareness about water, but also to evangelize.

“Being a Christian isn’t just about doing good things in the world,” Tremblay said. “What we really care about are opportunities to share the gospel with people. … This whole Walk4Water thing … it’s really just creating a platform for us to bring the community together. But then we can present the gospel to them.”

“The people … we’re trying to reach who don’t necessarily go to church, or who haven’t gone to church in a while, or who don’t feel like going to church, wouldn’t necessarily mind coming out and going for a walk said Jackson of Rural Hill. “It opens up an opportunity for the community to get involved, not just the church.”

A short service followed the walk and preceded a cookout at the Church of Smyrna. In a short message, Anthony Walker, pastor of Highway 231 Church of Christ in Murfreesboro, summarized the afternoon’s topics.

“I want to tell you . . . about a woman who actually went to water in the Bible,” Walker said, turning to the story of the Samaritan woman at the well.

He pointed out that Jesus and the woman spoke of two kinds of water—the ordinary kind, which quenches thirst, and the spiritual kind, which addresses people’s deepest needs.

“I’m not a preacher of the gospel unless I tell you about another water,” Walker said.

For Church of Smyrna member Maggie Sims, Walk4Water was about more than the satisfaction of completing the course.

“I’m feeling great, but I’m even more excited about completing the…wells,” she said after the walk. “There’s all these cars driving by and watching, and it’s just a great … message from Christ.”

Corey Spivey, the assistant pastor of the Jackson Street church, almost drove home when he saw the cloudy sky. He was glad he held out.

“You see so many different nationalities of people. We don’t look the same,” Spivey said of the event attendees. “But we have the same blood in us. This is the blood of Christ.

“I think it’s just a great display that when we all come together we put all our differences aside… just the amazing things we can do.”

This article originally appeared in The Christian Chronicle.

Ted Parks, a native of Chattanooga, Tennessee, is a correspondent for The Christian Chronicle. He attended Lipscomb University, the Harding School of Theology and the University of Texas at Austin.