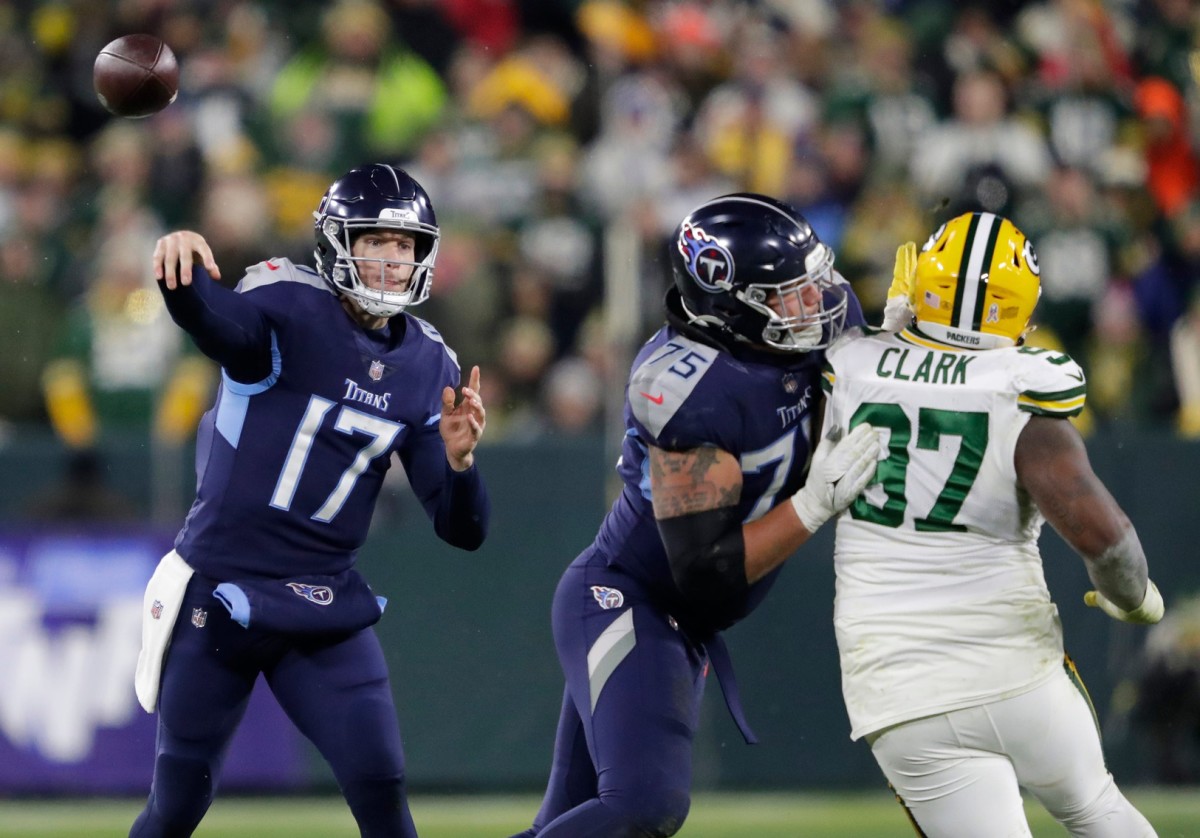 With an explosive passing attack for the first time this year, the Tennessee Titans delivered all possible season-highs against Green Bay on Thursday.

The Titans even managed to get a touchdown in every quarter for the first time this season.

These numbers were reflected in Pro Football Focus’ ranking of the Titans’ offense as the skilled players dominated the top spots in offense.

Here’s a look at some of the key PFF highlights/lowlights from the 27-17 win over the Packers:

• Top 5 Offensive Grades (15 snaps minimum) – Tight end Austin Hooper led at 85.2 with his first two-touchdown performance since September 22, 2019 when he was with Atlanta. Quarterback Ryan Tannehill was next with 82.7, followed by wide receiver Treylon Burks (80.6), running back Derrick Henry (75.0), and wide receiver Robert Woods (66.4).

• Bury the Lightning – It came as no surprise that the Packers came to Tannehill on Thursday, considering the Titans have had intermittent pass protection issues this season. In addition, the Titans had to do without starting center Ben Jones. But Tannehill made the Packers pay, completing 14 of 15 passes when he was blitzed for a total of 232 yards, one touchdown and a 141.0 quarterback rating.

• Hit deep shots – Before Thursday’s game, Tannehill had completed just six of 15 passes thrown 20 yards or more down this season. That all changed against the Packers, however, when Tannehill found four of six hits thrown down 20 yards or more. Those completions yielded 141 yards, one touchdown and one interception, and a 109.7 NFL quarterback rating.

• Catch the deep pass – Before Thursday’s game, Burks was targeted three times with passes thrown down 20 yards or more. He hadn’t caught any of those passes. Against the Packers, Burks caught two of the three deep balls thrown at him, for a total of 94 yards.

• Daley allows two sacks – PFF credited Daley with two of the Titans’ three allowed sacks. He has conceded six sacks this season, which earns him the second-highest finisher in the NFL. The other sack of Tannehill has been attributed to Henry.

• Put pressure on passers-by – The Titans’ streak of at least three sacks ended at six when Tennessee defeated Rodgers just once. Simmons produced that one, giving him a 6.5 this season, a half sack behind Denico Autry for the team lead. The leaders of the pass-rush pressure for the Titans against Green Bay were Autry with three (one quarterback hit, two whores) and Mario Edwards with three (three whores).

• Tough night for Fulton – Cornerback Kristian Fulton gave up just four completions on seven goals for 33 yards. However, it was Fulton who was PFFed for both Green Bay touchdown passes, giving him a 41.3 coverage score — the lowest of the Titans’ defensive backs on Thursday and his lowest of the season.

Avery strengthens – The Titans’ myriad injuries at the defender’s position resulted in Avery grabbing 20 snaps — his most since Week 2 in Buffalo. The undrafted rookie responded well, allowing just one shot – for minus 1 yard – on four goals. He also broke off two passes.