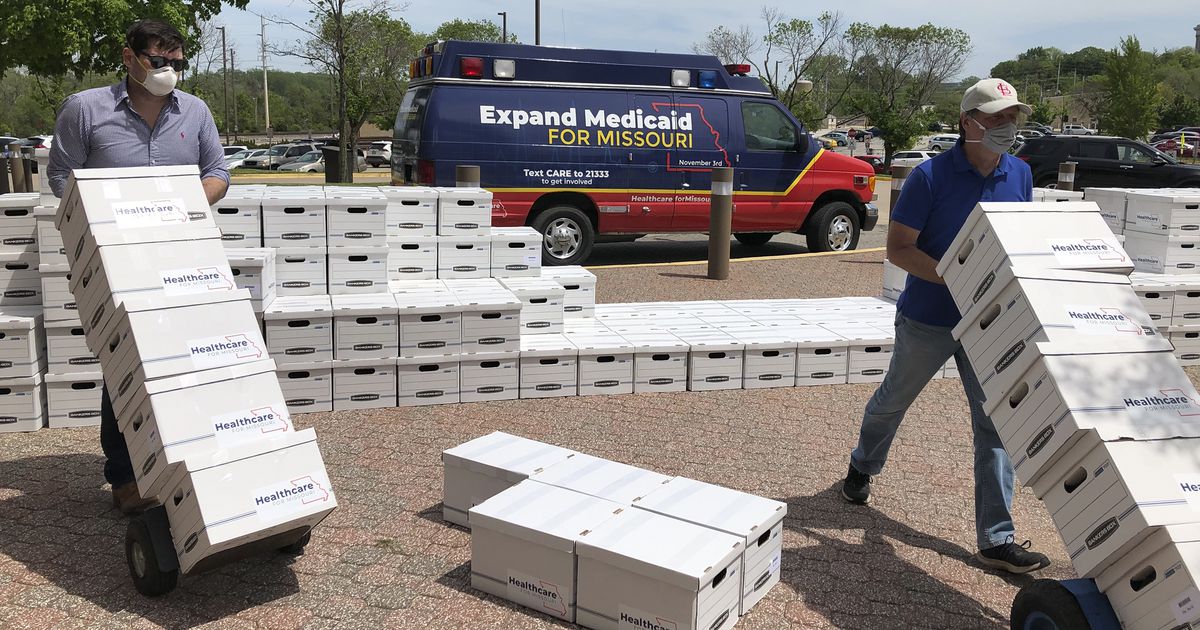 Health care issues are always on the ballot, and voters support greater access.

(AP Photo/David A. Lieb) Campaign workers David Woodruff (left) and Jason White (right) deliver boxes of initiative petition signatures to the Missouri Secretary of State’s office in Jefferson City, Missouri, in this May 1, 2020 file photo. Missouri voters approved the Medicaid expansion by a majority of 53% to 47%.

By Joseph Q Jarvis | Specially for The Tribune

During the several hours of election coverage I watched on Election Day, not much was openly discussed about health care reform. Nonetheless, American voters know that the way we do business in healthcare is unsustainable.

We cannot spend over trillions of dollars each year (primarily through our taxes) to support healthcare that is poor quality, highly inefficient and leaving our patients indebted. In the election reports, inflation and abortion were often mentioned as motives for many voters. Both are health issues, of course.

American consumers have seen healthcare prices soar into the stratosphere for years while healthcare benefits have eroded wage increases. Healthcare in the US is an economic kitchen table issue because it is largely taxpayer funded and therefore, like all these issues, will be on every vote.

Abortion is an inherently medical procedure and in many circumstances, such as B. an ectopic pregnancy, an urgent and life-saving procedure. Therefore, it will also be on every vote to grant doctors and patients the legal protection that is necessary to be able to make clinical decisions freely. But in the recently completed election, at least two votes for healthcare reform were open on the ballot — one was in the US Senate race in Pennsylvania and the other was an electoral measure in South Dakota.

John Fetterman, the lieutenant governor of Pennsylvania, who flipped that state’s vacant seat in the US Senate from red to blue, openly put health-care reform on the ballot. According to its campaign website: “I believe that health care is a basic, fundamental human right, not a privilege. But healthcare in America is far too expensive and complicated. I believe that in the wealthiest nation on earth, we have a moral duty to guarantee every American quality healthcare and end the repugnant practice of corporations profiting from people’s health and well-being.”

Fetterman proves that swing-state politicians can win by embracing comprehensive health-care reform, because American voters, whether red or blue, know it has to happen.

Even in red states, there is an underlying urge to find a way to fund health care for all. Earlier this year, six red states put the Medicaid expansion issue to the vote through a ballot initiative. In each of these states — Idaho, Maine, Missouri, Nebraska, Oklahoma, and Utah — voters chose to expand Medicaid even though their respective legislatures had already voted against it.

This year a similar ballot initiative went to voters in a seventh state, South Dakota. And again, Red State voters have approved the Medicaid expansion. Together, these balloting measures will place approximately 900,000 low-income people on Medicaid lists nationwide.

Why are these voting measures successful? One analyst suggested three reasons: listening to neighbors who will benefit, returning federal taxpayer money to the state, and protecting the solvency of rural hospitals and health clinics. Assuming that these reasons reflect the reality of voting in healthcare, I would suggest that broader healthcare reforms can also be achieved through voting initiatives.

American taxpayers have been trying to give themselves and their neighbors the gift of universal health care for 75 years. We want our neighbors to get the care they need. We all want our fair share of federal taxes to be purposefully spent on improving our lives and those around us.

We see the failure of corporate medicine in rural America and we know we cannot leave any person or any part of America behind. American voters will not be finished with health care issues until we find a way to provide better, easier, and therefore less expensive care to every American citizen.

Joseph Q Jarvis, MD, Salt Lake City, is a public health physician and the author of two books on health care reform, The Purple World: Healing the Harm in American Health Care and For the Hurt of My People: Original Conservatism and Better, Simpler health”. Care.” He is the Executive Producer of an upcoming documentary, Healing US.