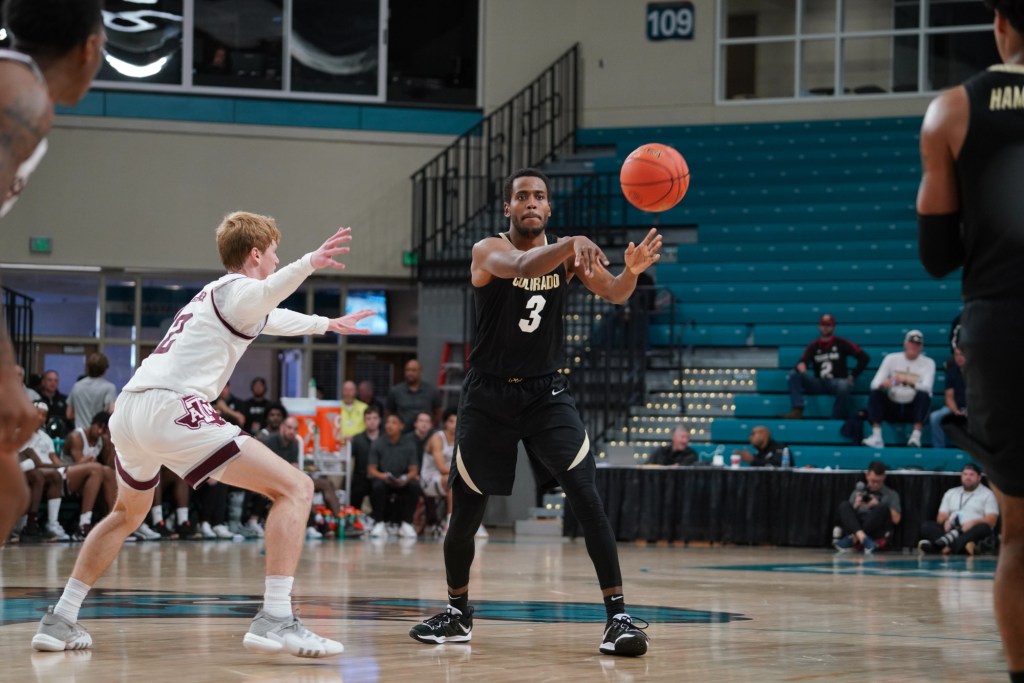 MYRTLE BEACH, SC – The trend was crazy and triumphant at the same time.

It’s also a trend that the Colorado men’s basketball team knows is unsustainable. So the goal on Sunday, when the Buffaloes finally complete their two-week, five-game road trip against Boise State in the finals of the Myrtle Beach Invitational, will be to end the wild roller-coaster ride of the first two weeks of the season.

It’s still less than two full weeks since CU opened the season with a home win over UC Riverside. Since then, the Buffs have racked up two wins over top-25 opponents in five days, first against then-No. 11 Tennessee in Nashville and then route No. 24 Texas A&M on Friday. Before each of those wins, however, CU suffered two heavy losses, first at Grambling State and then in Thursday’s opener in Myrtle Beach against UMass.

As it stands, the wins will probably count as better wins when the losses were bad losses. However, that will not be the case if the early up and down trend continues.

“I told the team in the dressing room afterwards that I had won a great setback (against UMass). But we’re tired of winning back victories. We want to start building on wins and we haven’t done that this year,” said CU head coach Tad Boyle. “We can’t be this fickle team. If we lose a game it has to be because someone beats us and not because we beat ourselves.

“No discredit to UMass because they deserved to win the game (on Thursday) but we helped with that in many different ways.”

The Buffs won their first two games against ranked teams for the first time since the start of the 2016-17 season when they defeated No. 22 Texas at the Legends Classic in Brooklyn before beating No. 13 Xavier at home. Wins over Tennessee and Texas A&M marked the first time since the 2012-13 season that CU had recorded two wins against ranked opponents away from home (No. 16 Baylor at the Charleston Classic and No. 9 Oregon). Texas A&M’s 103-75 loss was also the biggest win for Colorado against a high-ranked opponent in team history, surpassing a 25-point home win over No. 8 Iowa State by the Chauncey Billups-led Buffs on Jan. 18 . 1997

The buffs already have the foundation for strong tournament performance. But not if they keep going down against unranked opponents.

Sunday’s action marks the end of a Myrtle Beach Invitational that didn’t play out as expected. The favored teams in Thursday’s four first-round games — CU, Texas A&M, Boise State and Loyola Chicago — all lost. The ranking (for now) Aggies is 0-2. And like the Buffs, Boise State bounced back strongly from its opening loss, defeating Loyola on Friday.

“The four teams on the losing side of this tournament, we all have high hopes and want to play in the NCAA tournament,” Boyle said. “These games are important. They’re going to come back in November and it’s going to be either a really good win on your resume or a bad loss. We cannot take these for granted. Every time we step onto the ground, it’s an opportunity to prove ourselves on the national stage. We beat two ranked teams, which is pretty special. But the fact of the matter is, if you can’t take care of business in the other games, it doesn’t matter.”

NOTES: This is the first meeting between the programs… The .571 shot percentage CU recorded against Texas A&M (34 to 59) was the Buffs’ best mark since shooting .607 in a Georgetown loss in the first Round of the year 2021 NCAA tournament… Tad Boyle and Boise State coach Leon Rice are longtime friends, and Rice last summer served as an assistant for the Boyle-led U.S. Under-18 national team that won the gold medal at the FIBA ​​Americas Championship … Boyle needs four wins to match Sox Walseth’s program record of 261 … CU forward J’Vonne Hadley, the Buffs’ leading rebounder, is expected to miss his second straight game after suffering a right shoulder injury in Thursday’s loss to UMass has contracted… Like CU, Boise State has traded wins and losses so far this season. The Broncos opened with a home loss to South Dakota State before defeating Washington State. Boise State started the Myrtle Beach Invitational by losing to Charlotte before beating Loyola Chicago 70-48 on Friday… After six games in 14 days earlier in the season, including five away, the Buffs will be idle for a week before they finally return to the CU Events Center on November 27th against Yale.