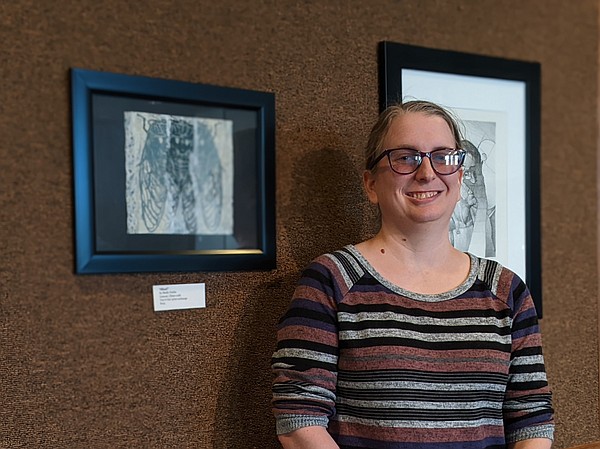 An eclectic collection of prints by Missouri artists is on display at the Missouri River Regional Library through December.

Artist Shelly Forbis collected the 24 pieces through several printmaking exchanges she’s hosted over the past decade.

“It’s a lot of work. I have to lock up the artists,” Forbis said. “But I love it. I love talking to these artists, even if it’s just in a visual form. It’s just an alternative way of communicating with each other.”

A print exchange is an opportunity for artists to exchange creations on the same subjects.

As an exchange organiser, Forbis creates a theme each year and provides participating printers with guidelines for submitting an entry. It limits participation to 15 artists per exchange.

After receiving the theme and guidelines, each artist submits 15 copies of their design to Forbis. She then sorts and distributes them so that each artist receives a copy of each participating artist’s prints.

“The biggest plus for me is when I assign these themes and then see how everyone responds to them differently,” Forbis said. “It’s just so different in how everyone perceives the same prompt given to them.”

In addition to her full-time employment with the Missouri Department of Treasury, Forbis hosts the Printmaking Exchange. In 2020 she moved to the capital.

She said it was exciting to see the work on display in the library. Many exhibitors prefer works by a single artist, she said, so finding places to display a collection of prints from the exchange can be difficult.

But the Jungfrau in the Press exhibition was very popular, she said.

“We’ve had group shows occasionally, but mostly they’re individual artists,” Matson said. “But yes, we got a lot of good comments about it. It’s so different from our previous exhibits.”

Printmaking is a kind of collective term for media that allows an artist to reproduce a design multiple times.

Screen printing is a form of printmaking. Other forms may use ink on metal, wood, or stone to transfer an image to paper. Forbis said she often works with blocks of wood to make prints.

One of the artists in her exchange, she said, creates many three-dimensional structures with boards that he’s screen-printed onto.

“The uses are really endless, but printmaking just isn’t as well known as painting, photography and ceramics,” said Forbis. “But I love it. It’s a different way of thinking.”

The creation of a print is process driven, but each process is entirely unique, Forbis said. Each print is made in reverse, she explained, because the reflection is then printed on paper.

The art form gives artists a chance to experiment with countless copies and make an image as good as possible, Forbis said.

Though she did some printmaking in high school, Forbis said she really got her start in college at Truman State University, where she earned a fine arts degree in printmaking in 2008.

She said she started the exchange to keep in touch with printmakers and meet new ones. Some of her former professors are participating, she said, as are some artists from Australia and Egypt.

“My base camp is mostly a lot of my Missouri artists and then also Truman artists who then went back to their homes and spread the word to their friends who are printmakers,” Forbis said.

When she first started hosting printmaking exchanges, Forbis said she had maybe seven artists participate. Artists often choose to submit based on what else they do. Forbis said the largest fair it has hosted had 22 artists, but it has submitted some with thousands.

“Print exchanges don’t happen very often, especially to the extent that I do where everyone gets one back,” she said.

Communication between the exchange host and the artists is rare, Forbis said, so she doesn’t know what she’s getting in terms of the finished work.

The element of surprise has resulted in some “lackluster” entries, Forbis said, but for the most part the exchanges result in quality prints that go well together.

“It’s almost like Christmas when we get the packages back because you see everyone’s pressure,” she said. “It’s just fun to look at them as a set or just individually.” 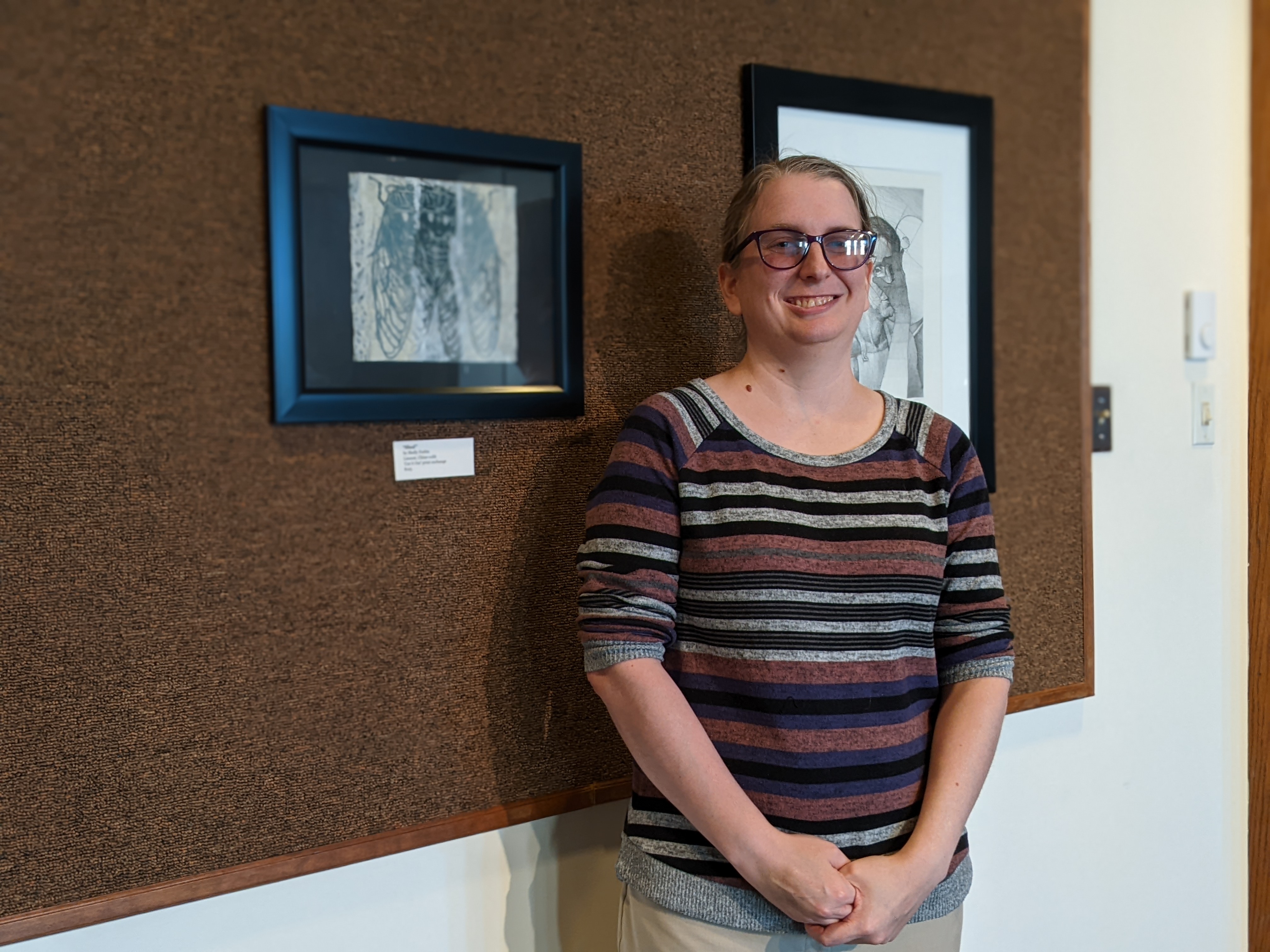 Ryan Pivoney/News Tribune Jefferson City artist Shelly Forbis has exhibited several works in the Damsel in the Press exhibit at the Missouri River Regional Library. The exhibit features work by a number of Missouri graphic artists who have participated in printmaking exchanges hosted by Forbis over the past decade. 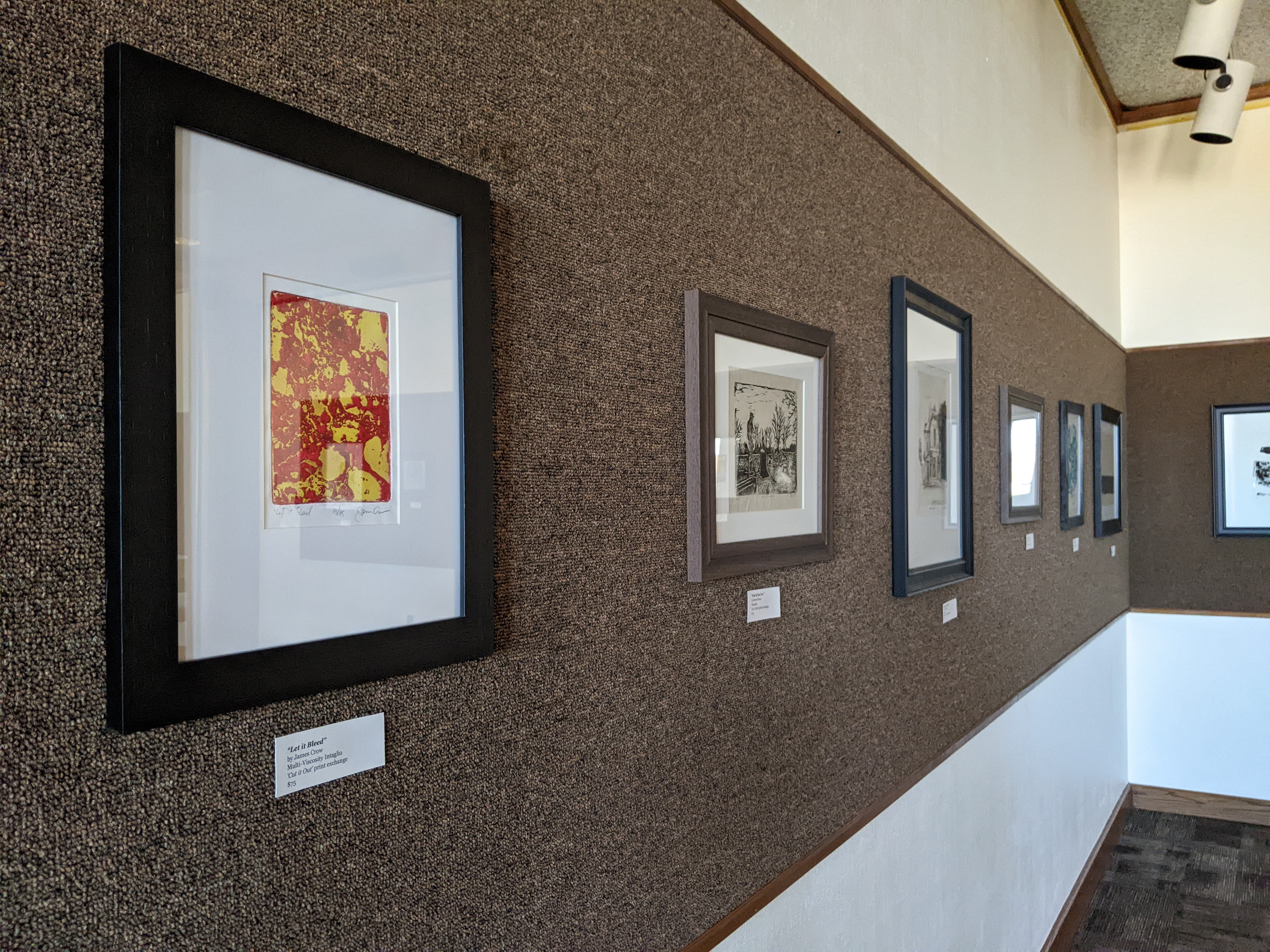 Ryan Pivoney/News Tribune The “Virgin in the Press” exhibit at the Missouri River Regional Library features 24 artworks created by Missouri printmakers. Jefferson City artist Shelly Forbis curated the works on display, having collected them through printmaking exchanges for the past decade. The exhibition will remain on view until the end of the year.