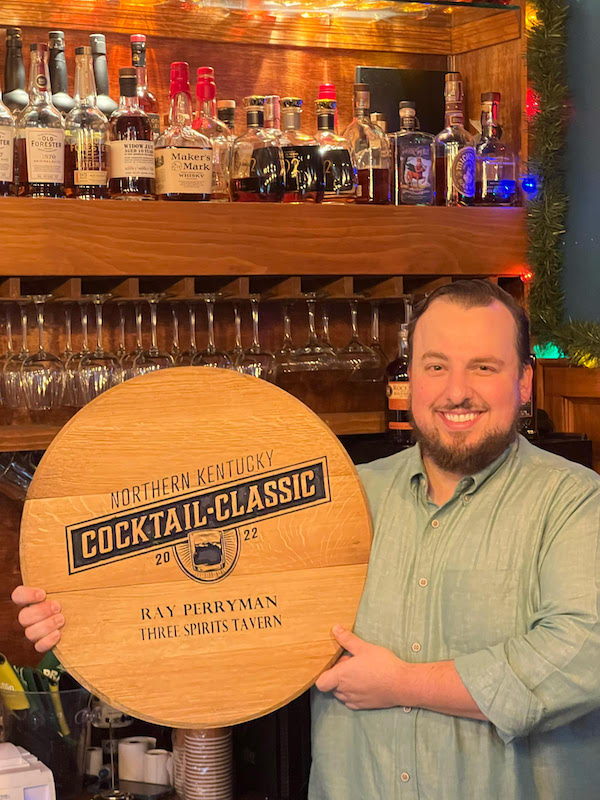 The Northern Kentucky Cocktail Classic sought to determine the best bartender along the B-Line – a collection of five distilleries, eight bourbon bars and six bourbon-centric restaurants in Northern Kentucky.

The Three Spirits Tavern hosted the event on Sunday, October 9th, which brought together the finalists from a month-long competition during September, National Bourbon Heritage Month. Bartenders who sold most of their signature cocktails from their respective establishments received an invitation to the classic.

Contestants voted on the top four bartenders’ concoctions, which had to include TAO Bitters from a small Cincinnati-based company and Kentucky Bourbon to advance to the event finals. Perryman received a cash prize of $500 and a special bourbon keg trophy and mixology set from Barfly, presented to him as a token of achievement at a special party at Three Spirits.

“The Northern Kentucky cocktail classic was born from a simple idea to showcase Northern Kentucky’s bourbon excellence and find a fun, exciting way to showcase the talent and creativity of B-Line bartenders,” said the owner the Three Spirits Tavern and organizing partner of the Charlie Zimmerman contest. “Now that we have the first event like this under our belt, we can focus on growing it to make the 2023 event a rival, if not surpass, the Lexington and Louisville events that contributed to it have to inspire it.”

Perryman hopes his win inspires people to patronize The B-Line even more.

“We have some amazing local distilleries here in northern Kentucky with some of the finest spirits made in America, but bourbon is without a doubt unique to Kentucky,” Perryman said. “This event was a perfect opportunity – no pun intended – to mix that heritage with my own creative touch. The bar and restaurant scene here is very tightly knit, so it was also a great, friendly competition between friends.”

First introduced in early 2018, The B-Line was created to capture the millions of bourbon-curious people who annually travel along I-75 or fly into CVG Airport to visit Kentucky’s famous Bourbon Trail. The line consists of five distilleries — Boone Country Distilling Co., New Riff Distilling, Neeley Family Distillery, Second Sight Spirits, and The Old Pogue Distillery — all of which also feature on the Kentucky Bourbon Trail Craft Tour.

B-Line also includes eight bourbon bars, recognized by The Bourbon Review as The Best Bourbon Bars in America, and six bourbon-centric restaurants. All 19 stops are located throughout Covington, Newport, Independence, Sparta, Augusta and Maysville, Kentucky. A full list of stops can be found on The B-Line’s website.

“Celebrating our local role in a much larger story surrounding Bourbon heritage, letting people discover some of our great local establishments, and showcasing the creativity of the region—what’s not to love about the Northern Kentucky Cocktail Classic?” said Julie Kirkpatrick, President and CEO of meetNKY. “We love to celebrate being the entry point to the Bourbon State and the rich culture and history that comes with it. We can’t wait to see this competition grow and see more America’s Native Spirit enthusiasts at next year’s event.”

For more information about The B-Line and the various events and special offers for National Bourbon Heritage Month, visit thebline.com. To learn more about meetNKY, visit meetnky.com.