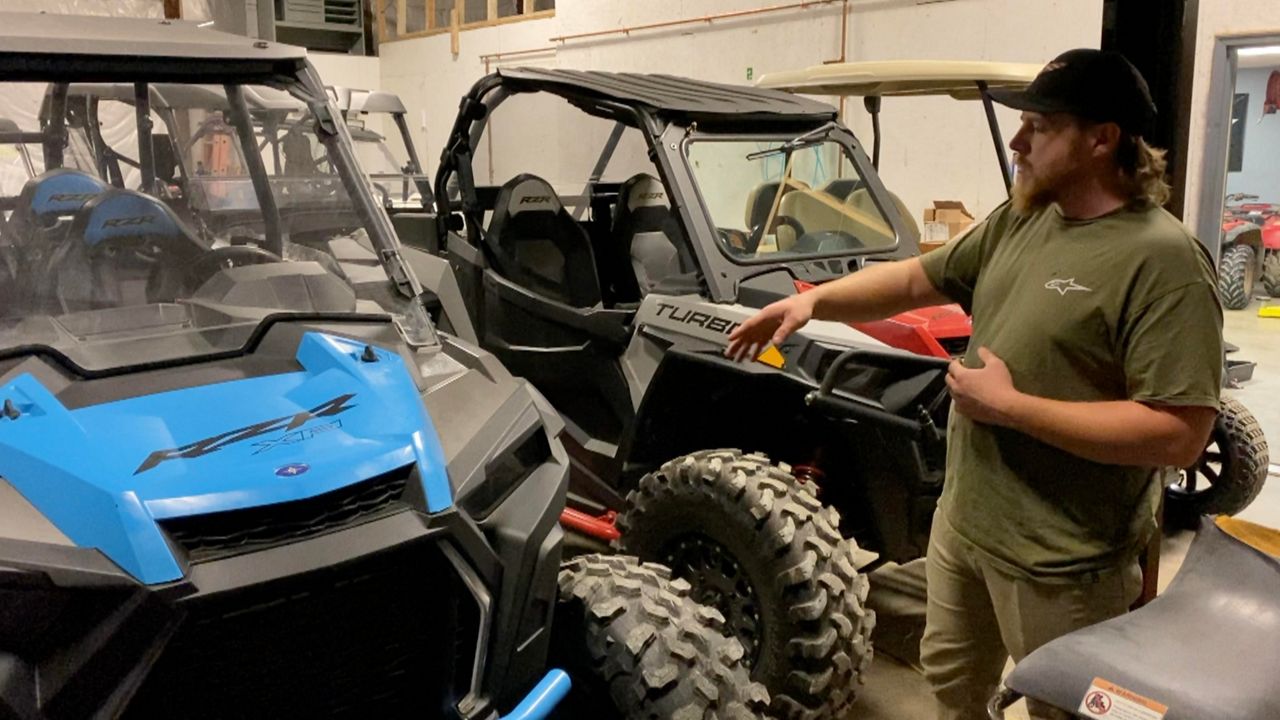 ALEXANDRIA, Kentucky — A manager at a motorsports business in northern Kentucky says people who get behind the wheel of ATVs need to be more careful to be safe. The advice comes after a tragic UTV incident claimed the lives of a teenager and a young child and injured another teenager in eastern Kentucky.

Jake Clair, parts manager for NKY Motorsports and manager of the YouTube channel JustAPutt Offroad, has strayed off the beaten track for most of his life.

“From dirt bikes, quads to full-blown trucks built for the woods, side-by-side, wherever it is. I’ve been doing this forever,” Clair said. “The biggest thing is the thrill or adrenaline rush of going out and the views and scenery that you can drive around and see. These things will go to places where you can’t even hike.”

NKY Motorsports sells everything from all terrain vehicles (ATVs) to dirt bikes and golf carts to UTVs. It also sells parts and is a full-service maintenance shop. UTVs are generally larger than ATVs and usually have roll cages for added protection. They allow thrill seekers and people who just want to get around their country to reach these destinations with ease.

Every once in a while, however, a tragic story crops up that, for some people, makes UTVs safe and whether anyone really needs them.

“It’s very frustrating because if people were educated on how to use the right safety gear then everything would be fine. Much of this would not affect the industry. You wouldn’t have people thinking that all these need to be taken off the market, they are insecure. In general, it’s not the machine that’s unsafe, it’s the user who wasn’t safe operating the machine,” Clair said.

The latest tragedy happened in Magoffin County in early November. On November 5, a 2018 Polaris UTV went off the roadway, went over an embankment and struck a tree on Kentucky Route 7 in Salyersville, according to Kentucky State Police. The 15-year-old driver suffered serious injuries. Another 15-year-old passenger, Angelica Rife, identified on Facebook by her high school, was pronounced dead at the scene. A four-year-old boy was also taken to hospital and later died from injuries sustained in the collision.

The investigation is being continued by KSP Accident Reconstructionist Trooper Ryan Hale.

Magoffin County High School wrote of Rife, saying in part, “We are confident that she had a bright future ahead of her. Though she will be greatly missed, her memory will live on in the hearts of all who were lucky enough to know her.”

Clair said he had his own tight calls.

“I was personally injured and my fiancé was injured in an accident where we weren’t wearing our seat belts. She broke her wrist, crushed her hand, had a large laceration on the back of her head and a concussion. I had a concussion and needed 17 stitches on the back of my head. And all because I didn’t buckle up. We drove five miles an hour and overturned. And it threw us out of the machine,” Clair said of the incident, which happened about two years ago. “Well, my engine won’t start until you put your seat belt on.”

He said he tries to instill the importance of harnesses and helmets in all of his customers.

“Most people don’t know how to buckle up properly. When set correctly, these will snap into place. If you roll over, they lock you up and hold you down,” Clair said. “This is the most common problem for people who are injured or killed when they roll over. You cannot prevent an accident. You cannot prevent an injury. But if you take the right precautions to protect yourself, like you would if you got in the car, then in most cases you will be safe.”

Clair said people also need to respect the power of the machine they operate. He pointed to a UTV in the store that he said can go up to 85 miles per hour and weighs over 2,500 pounds.

“There’s a lot of power in your foot. And it’s ready to go whenever you step on it. And if you don’t think about other safety considerations while you’re having fun, sometimes you’re going to miss out on having fun,” Clair said. “It’s like driving a car on the Autobahn. There’s a reason cops stop you for this. It’s not just about giving you a ticket. Because they don’t want to see you thrown out of the car. There’s no one in the woods, in your backyard, or on the field you’re playing that’s going to stop you and say, “Hey, buckle up.”

Off-roading is not for everyone. It should be safe, Clair said, for thrill-seekers like him.

Clair says there should be more safety courses and more general education for people looking to get into the UTV riding hobby.