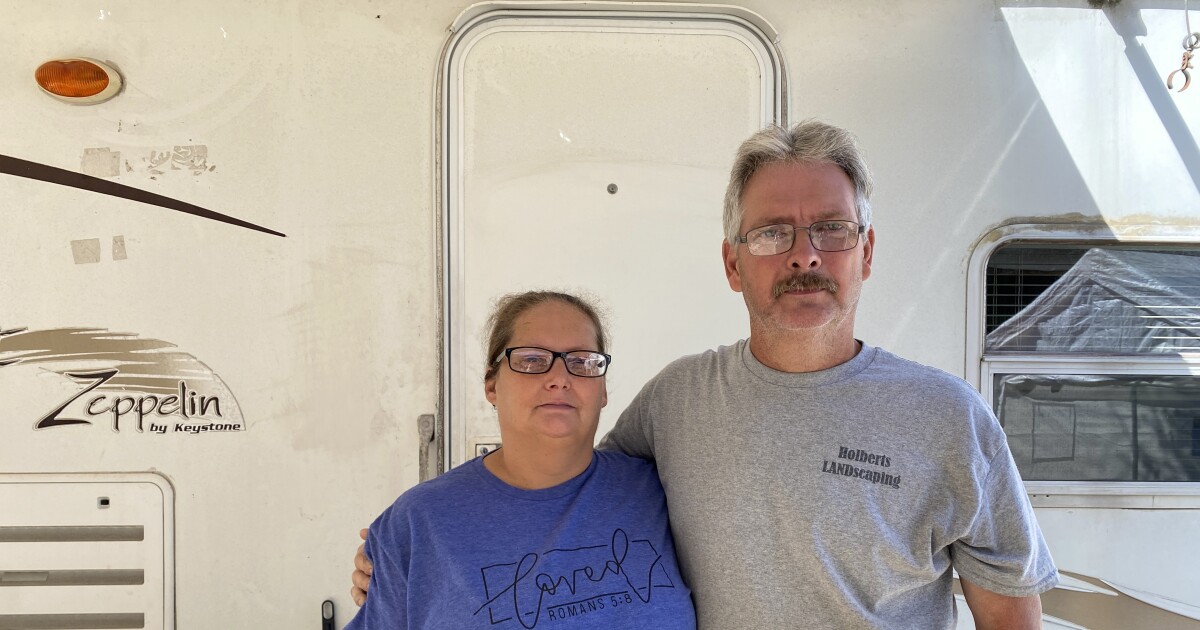 This story originally aired on the November 18, 2022 episode of Inside Appalachia.

On July 28, unprecedented flooding hit communities throughout southeastern Kentucky. People lost homes, cars, family photos. Many musicians have lost instruments and that has meant they have not been able to partake in the cultural traditions that guide their lives. But through the generosity of community members, some musicians have been able to reconnect with their music practice and find comfort and even joy.

Dean McBee was a musician who was badly hit by the flood. McBee lives in Millstone, an old coal camp on the Kentucky River. Standing in his yard, McBee counted all the homes in that community that had been lost. “Five, six, seven, eight, nine,” Dean said. “Ten, eleven, twelve, thirteen in Millstone.” In a community of fewer than 100 people, thirteen is an amazing number.

McBee grew up in Millstone. When he returned to Millstone from South Carolina 25 years ago to be closer to his aging parents, he bought the house next door to theirs. After the death of his parents, McBee’s sister moved into the family home. Her house was one of the houses lost in the flood. McBee looked at where the house once stood and thought about its current condition. “Just an empty lot now,” McBee said. “This is where we grew up, right here.”

The flood filled McBee’s home with about six feet of water, but he and his wife plan to rebuild it. McBee did a lot of work gutting and mildewproofing the first floor. McBee warned me as we climbed the rickety stairs inside to check on his progress. “Be careful on these steps, they just lean here,” McBee said.

Then he opened the door and showed the interior. “Everything ripped out. And I’m going to take all the joists back, put the plywood on top, sheetrock and insulation,” said McBee. The inside of the house was down to the studs. All of the flooring had been torn out, leaving the house with only one floor.

But although McBee had made some progress on his house, he hadn’t been able to spend much time on the woodshed at the back. This was his music room. The outside of the shed was adorned with cast-iron skillets, vintage license plates, and carved wooden animals. “My father’s brother carved the bear. Then my dad made the fish and the birds,” McBee said.

Then McBee showed the inside of the shed. “This is my music stuff,” McBee said. “Mixers. My mic, my studio mic – I don’t know where it is in here.

Amplifiers and speakers were thrown to the side. Dried mud was caked all over. Metal parts were rusted and black mold was starting to grow on the walls. The license plates hanging above the door showed how high the water was rising. “It went up to the license plates, the water did it. It was up to the ceiling because do you see the light here?” said McBee as he pointed to the light on the overhead fan. “There was water in there, see?”

In the small camper where McBee and his wife now live, McBee told me how he got into playing the guitar.

McBee’s father was a well-known flat-top guitarist in the community. He played country music in the city’s bars and nightclubs. But then he was rescued, trading late nights in the bar for early mornings in the church. After that, he sent an inquiry to McBee.

“He asked me something. He said, ‘Son, promise me you won’t take your talent to the bars or nightclubs.’ And I promised him that. And I play gospel, strictly gospel,” McBee said.

As a young boy, McBee would travel to various churches with his father to play. “Evangelists came in and said, ‘Now, come and help us with the music.’ And we would go. That week we were in revival with them and we helped them with the music,” McBee said. “And that’s what we did, we just went to different churches … and just have a good time with the Lord.”

As an adult, McBee continued to play gospel music with his father. For 20 years they were part of a group that toured neighboring counties, with McBee on bass and his father on flat-top guitar. When McBee’s father died a few years ago, his guitars and amps went to McBee. McBee had kept them in the music shed. It was filled with his family’s musical history. On the day of the tide, everything floated in the water for about 13 hours. McBee said it was painful to see his father’s guitars and amps in such a rough state.

“I packed these guitars and amps for him when I was about 11 or 12 years old,” McBee said, fighting back tears. “And there are other guitars like this. But it’s not this guitar. Money couldn’t buy her back.”

All of McBee’s guitars, including his father’s, dried up at his other sister’s house. He has hope that some of them can be saved. McBee said his father’s amps were too far away to fix. But he intended to keep her anyway.

“And people say, ‘What are you doing to them?’ I say, ‘You’re going to sit right there. I will look at them every day. Because as long as I have her, I have my dad,” McBee said.

Since the flood, McBee has had some bright spots. A friend bought him a new bass and amp to replace the lost ones. Now he can play in church every Sunday again. And McBee’s sister cleaned up his flattop guitar. He had recently gotten it back from her and he was already feeling relieved to be able to play again.

“I’m off the ground and out,” McBee said. “If I’m feeling down, I can get my guitar. And I just feel better when I can play the guitar.”

The Folkways Reporting Project is made possible in part by Margaret A. Cargill Philanthropies support for the West Virginia Public Broadcasting Foundation. Subscribe to the podcast to hear more stories about Appalachian folk life, art, and culture.