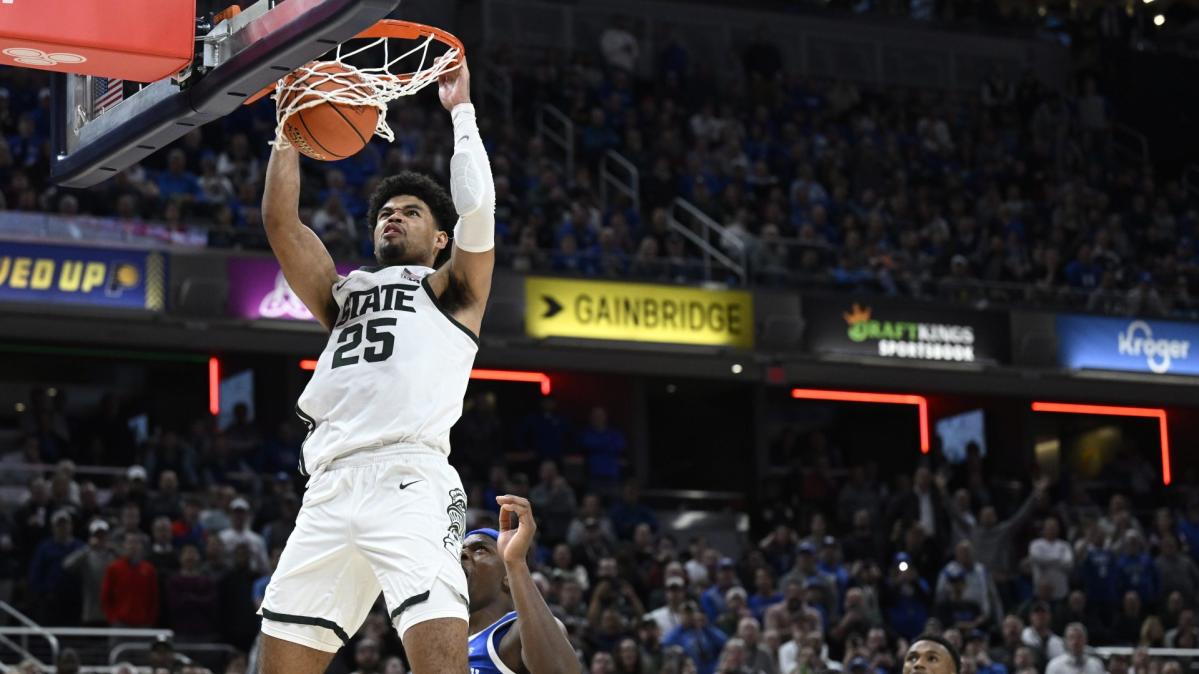 The search for No. 4 Kentucky goes on – even with consensus international of the year Oscar Tshiebwe back in action.

“I just saw (coach) Tom (Izzo) in the hallway and said you were more prepared for the end than we were,” said Kentucky coach John Calipari.

The Spartans (2-1) were ready, thanks in part to what they endured on Friday when they lost by a point to No. 2 Gonzaga on the deck of the USS Abraham Lincoln.

But they also got some help when last season’s consensus international of the year Oscar Tshiebwe fouled late in the first overtime after scoring 22 points and 18 rebounds (2-1) in his season debut for the Wildcats.

Joey Hauser had 23 points, Hall had 20 and Sissoko had a career-high 16 points with eight rebounds for the Spartans, who spent most of the second half catching up.

Sissoko changed the tenor of the game with his game-changing alley-oop slam at 1:45 in the second OT.

“There’s nothing like seeing Mady go for a lob because you know it’s going to be a dunk,” Hauser said.

And with Tshiebwe on the bench, Michigan State finished off a 13-1 win over Kentucky, the final blow coming in the last minute with another Sissoko dunk.

“Yes, I set it up. I said, “Let’s just dunk the damn ball,” Izzo said sarcastically. “I probably like dunks because I never could.”

“Believe them, they did what they had to do,” Calipari said. “But the (first) out of bounds game, we never do that. We just left him.”

Michigan State: Izzo’s teams always seem to end up stronger than they started, and if these Spartans do that again this season, they could be scary. Despite poor early shooting, they overcome a slow start and knock out a top-five team.

Kentucky: Caliparis’ squad didn’t need Tshiebwe last week. He missed the first two games while recovering from knee surgery. But when he’s on the ground, the Wildcats are clearly one of the best teams in the nation. They could slip a few places after that loss but have a chance to bounce back – if they can beat No. 2 Gonzaga on the road this weekend.

Dick Vitale returned to ESPN’s show Tuesday night after his battle with cancer. Vitale missed most of last season when his signature voice was marred by lymphoma and melanoma.

Sitting center stage in front of Wildcats fans, he opened the show by thanking everyone who had sent texts and letters of support, acknowledging the famous words of his late friend Jim Valvano – “Don’t give up. Never give up” – inspired him to persevere.

“This is a really good team and it’s going to be a great team,” Izzo said. “So all Kentucky fans, don’t jump off the ship. I told John it’s illegal to have that many seniors in Kentucky.”