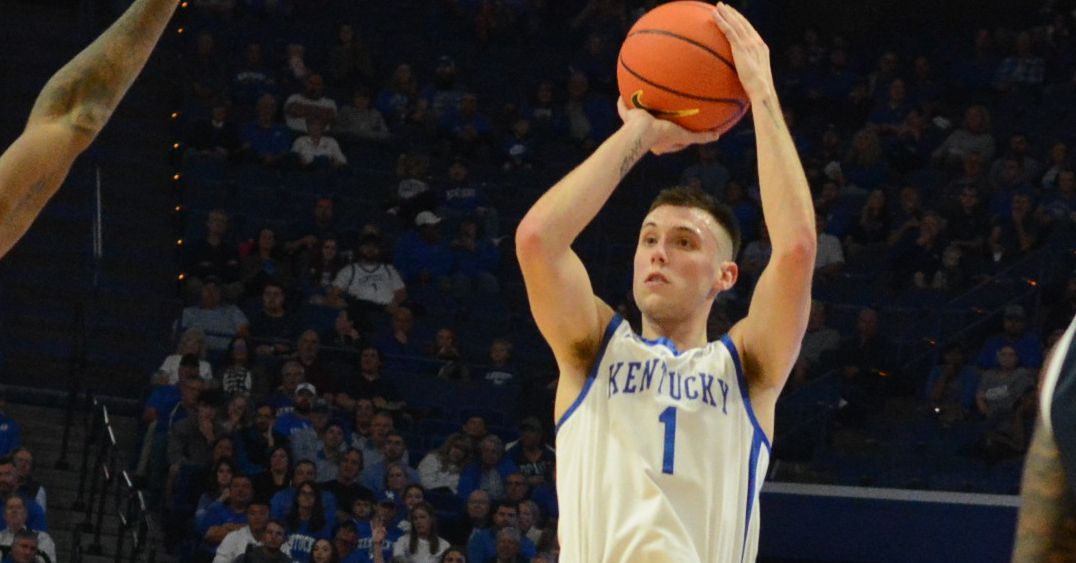 Fueled by a double overtime loss to unranked Michigan State, the South Carolina State Bulldogs stood no chance Thursday night as the Kentucky Wildcats clinched a 106-63 win at the Rupp Arena.

CJ Fredrick scored Kentucky’s first six points, starting the game with a three-point corner kick and scoring the traditional three-point game with a layup and a free throw. Jacob Toppin then scored with a lob pass from Sahvir Wheeler and a three by Cason Wallace gave the Wildcats an early 11-3 lead.

SC State then went on a 7-0 run to cut the lead to one before the Wildcats could find a breakup and leap forward at the 10:32 mark when Oscar Tshiebwe got a steal on the defensive end and over the full length slammed the floor to get past a defender to complete a thunderous slam dunk to give the ‘Cats a 19-14 advantage. Kentucky eventually turned up the heat and took a 49-30 lead at halftime.

The Wildcats, who started the week 4th in the AP poll, will now turn their attention to Sunday’s matchup with 2nd-ranked Gonzaga, who lost to 11th-ranked Texas earlier in the week.

Below are four things to know about the dominant win over SC State.

After a horrible first half from three-point range, the Wildcats were suspended in the second half, finishing 10-to-24 (41.6%) to help the Wildcats hit the century mark.

Kentucky struggled early from a three-point country and went 2-for-11 (18.2%) in the first half, with Fredrick and Wallace the only British players to score from deep. Initially, most of the points came from Kentucky in transition and from offensive stick backs as the Wildcats still have work to do on the half-court offense. Antonio Reeves and Fredrick both struggled against Michigan State but shot the ball much better and won. Fredrick is possibly Kentucky’s best offense decision maker, as the Iowa transfer turned down several open looks to penetrate and make the extra pass that’s a key key in half-court sets.

Freshmen Ugonna Onyenso and Adou Thiero came back into play with some good minutes against the 0-4 Bulldogs of the Mid-Eastern Conference on Thursday night. Onyenso only played 1:08 against Michigan State and looks overwhelmed on the big stage. On Thursday night, however, the 6-foot-11, 225-pound center had six points and seemed more comfortable against a team that had little post-production.

Thiero, who caused a stir during the exhibition season, did not play in Indianapolis on Tuesday night and only saw action against SC State for the second time this season. He ran into foul problems early on and was benched at 6:03 with his third foul. However, these types of games offer great learning opportunities for all four newcomers – Wallace, Livingston, Onyenso and Thiero – as all but Wallace are still trying to play a part this year.

Daimion Collins gets some love from Big Blue Nation

After losing his father Ben last week, Collins struggled as expected with Michigan State but found his rhythm Thursday night, blocking shots, running across the floor and clinching some easy baskets. Collins appeared on course for a breakout season during the summer trip from Kentucky to the Bahamas and has heaps of potential. He’s got the size, length and athleticism to make a difference, but it may be some time before he regains his footing and claws his way through some playing time with a big roster. It was great to see BBN as Root Collins as he had a productive game on Thursday night.

Cal is still looking for the best combinations

Coach John Calipari is still looking for the combinations that work best together as the off-conference schedule is the perfect time to experiment. On Thursday, the Hall of Fame coach rolled out five different looks, starting Wheeler, Wallace, Fredrick, Toppin and Ware, while Tshiebwe rested a little early due to his knee recovery.

Kentucky started perhaps their best lineup to start the second half with Wheeler, Wallace, Fredrick, Toppin and Tshiebwe. It’s no secret that Calipari enjoys playing as a dual point guard, so expect Wheeler, who finished with 10 assists, and Wallace to be on the court together this season. Of course, Tshibwe will always be on the ground when it counts, and Fredrick and Reeves need to see action as the team’s best perimeter guards. With that, Ware and Onyenso battle for minutes behind Tshiebwe and Cal needs to find minutes for Livingston and Toppin, who were rebound machines Thursday night with nine boards. Finding minutes for Collins could be the biggest challenge early in the season.

On to the next one when Kentucky takes on Gonzaga this weekend. Go cats!