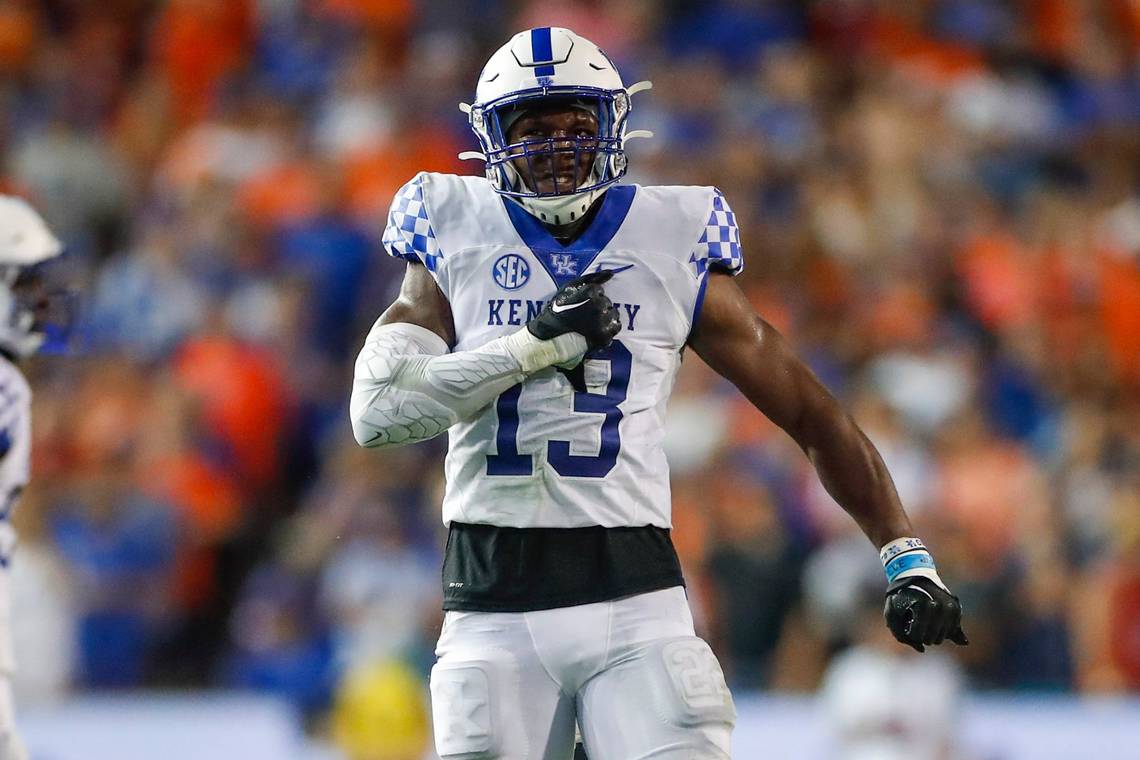 Kentucky Football junior outside linebacker JJ Weaver is apparently considering jumping to the NFL draft after the season.

Weaver, who is in his fourth year on campus, will attend Kentucky’s Senior Day celebrations on Saturday before the regular-season finals against Louisville. Also on the list of Senior Day participants were fourth-year juniors DeMarcus Harris and Taj Dodson.

“He’s going to have an option, he’s going to have to make a decision,” Kentucky coach Mark Stoops said of Weaver, noting that there are current seniors on the list who attended Senior Day a year ago and are still making the decision to go to school to return.

Weaver, a graduate of Moore High School, is tied in sacks (two) for team lead and ranks second on the team in tackles for loss (five) despite missing two games with an elbow injury and returning to less than 100 after returning % plays set up.

“I think he played really well on his attempts,” defensive coordinator Brad White said of Weaver last week. “Before the injury, I thought he was playing at an extremely high level. Obviously he had to work his way back up to that confidence level somehow. … He kind of gets the confidence back in that arm.

“Look, it’s hard to get past Rush with one arm. I think people are losing sight of that. If you’re not necessarily 100% – but I think he’s getting stronger and stronger and more comfortable with it every week.”

White praised Weaver for his performance in the loss to Vanderbilt, in which the 6-foot-5, 242-pound outside linebacker had seven tackles and two quarterback rushes.

In a recent update to his NFL Draft Bigboard, ESPN analyst Mel Kiper Jr. ranked Weaver just outside of his top 10 outside linebackers in the 2023 draft class. Weaver arrived in Kentucky as a four-star recruit hoping to follow in the footsteps of former wildcat Josh Allen, who was the 2018 National Defensive Player of the Year and 2019 first round draft pick for the Jacksonville Jaguars.

Weaver was a redshirt in 2019, his first season on campus. Just as Weaver was beginning to deliver on his remarkable promise in 2020, he tore the ACL in his right knee in a game in Florida in late November. Weaver returned to the field quicker than expected to play in the 2021 opener, but coaches said he’s still under 100% throughout the season.

This season was to be the year that Weaver broke out after being perfectly healthy, but he suffered an elbow injury in week three against Youngstown State.

Harris, a reserve wide receiver, has caught four passes in 11 games this year. Dodson, a reserve defenseman, was limited to seven games this year due to an injury. He has scored a tackle while mostly playing on special teams.

Three players listed as seniors on the list (tight end Keaton Upshaw, fullback Justice Dingle and running back Ramon Jefferson) have no plans to attend Senior Day. Upshaw and Dingle have one more year of eligibility due to the COVID-19 pandemic. Jefferson plans to apply for a TU for an additional year of eligibility after tearing his cruciate ligament in the season opener.

Oats’ career was ended by a stroke in May 2020. He continued to remain with the team in recent years, frequently attending games in his wheelchair. The UK launched a fundraiser to cover Oats’ medical costs as he continues his rehabilitation process.