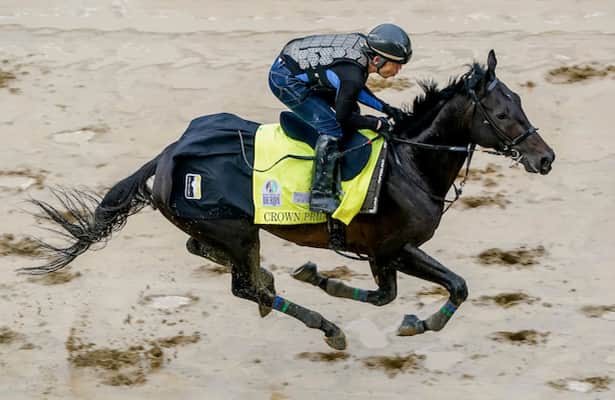 The Triple Crown Tracker reviews the horses that competed in the most recent Kentucky Derby, Preakness and Belmont and keeps track of what they’re up to after the Triple Crown season ends.

Five runners from the 2022 Kentucky Derby competed in the Breeders’ Cup on November 5th.

Although the Breeders’ Cup Classic winner, Flightline, was a four-year-old who did not compete in the Kentucky Derby, the Classic’s third- and fourth-place finishers were both present at this year’s Run for the Roses. Taiba well behind the leading pair and continued to soar into third place, 8 3/4 lengths behind the winner but only half a length behind second-placed Olympiad. Kentucky Derby winner Rich Strike used his usual late-running style to finish fourth. Epicenter, runner-up in the Kentucky Derby, was pulled to the back stretch with a fractured condyle and is recovering after undergoing surgery to repair it.

Two other Kentucky Derby contestants competed in the Breeders’ Cup Dirt Mile. Cyberknife made an early move and led on the long corner but was caught late by favored Cody’s Wish, who won by a head. Simplification, relegated to midfield after a bumpy start, flattened out to finish seventh, 13 lengths behind the winner.

Rattle N Roll was also in action during the Breeders’ Cup weekend in Keeneland. He stretched and faced older horses in the Thoroughbred Aftercare Alliance (G2) where he was sent off as a favorite but finished fourth, thirteen lengths behind strong wire-to-wire winner Next.

In Japan, Crown Pride also tried older horses in the JBC Classic, a race that has Grade 1 status in Japan but is only listed internationally. He finished second to TO Keynes, a 5-year-old who won the Champions Cup (G1) in 2021.

Aside from the horses that competed in the Kentucky Derby, Secret Oath is the only other Preakness competitor to also compete in the Breeders’ Cup. In her first start against older horses she made an early move and was within reach of the furlong mark but flattened out and finished fifth, 5 1/2 lengths behind Malathaat.

Aside from Rich Strike, the only Belmont Stakes horse to compete in the Breeders’ Cup was Nest, who made her second start against older mares and mares in the Breeders’ Cup Distaff on November 5th. She sent off the 7-5 favorite against her as the eldest she turned home at close range but failed to keep up with the Malathaat, Blue Stripe and Clairiere battle late on. She crossed the wire fourth, 3 1/4 lengths from the fight line.