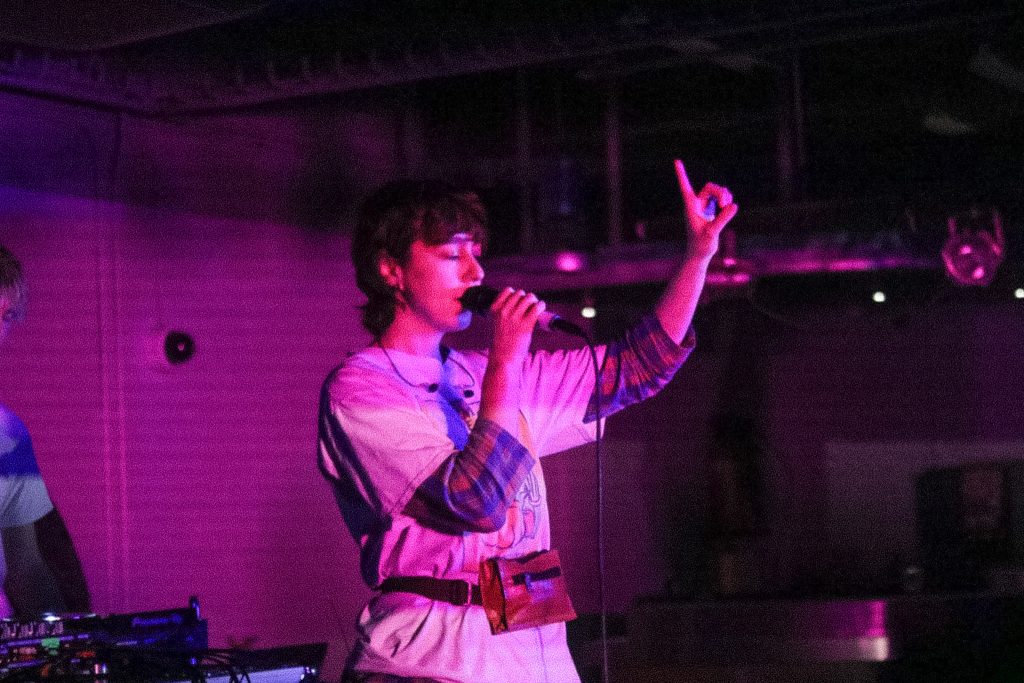 Blue Hawaii consists of Raphaelle “Ra” Standell-Preston and Alex “Agor” Cowan. They are known for their dreamy and electronic beats. Sonically, they draw inspiration from ’90s dance music, while their lyrics address their emotional vulnerability in the context of the complexities of love, heartbreak, and breakup.

Madeline Schalk, BUMP chair and senior with a major in economics, described her reasons for bringing Blue Hawaii to BU.

“I’ve been listening to Blue Hawaii for a few years,” said Schalk. “My sister introduced me to the group and I wanted to put on a very energetic performance that would get the audience going. They also came out top in our fall poll for BUMP shows at school.”

The Underground Cafe was transformed with mood lighting that illuminated the space in a mix of deep purples, greens and blues. Along with the eclectic lighting, the intimate setting allowed both artists to truly refine their music while connecting with the audience.

DJ Ambrosia’s energetic set was a full body experience as you could literally feel the vibrations of the music in your chest. The combination of her killer beat drops, heavy bass and dreamy tones throughout her set made for an impressive opening for the audience.

DJ Ambrosia, aka Genie Fyodorova – a senior with a biology major – reflected on the focus they use before a performance.

“You look at the crowd and you see how the crowd is feeling and you react to that,” Fyodorova said. “You look at how they’re doing and what they’re vibrating with and choose your next song from that. I try to be very conscious when choosing my songs.”

As Blue Hawaii took the stage, they continued to build on the energy DJ Ambrosia started. Her opening song, LOVE, from her 2022 EP My Bestfriend’s House, introduced the crowd to Standell-Preston’s ethereal vocals and Cowan’s DJing skills. They continued their set by playing their 2020 EP Under 1 House, which included “Let it Be Us” — a song that started stripped down but slowly built the bass under Standell-Preston’s vocals and became a wistful one radiated a feeling of intense love. Her third title track from that EP, “Not my Boss!” got the crowd going as she shouted back the lyrics, “You’re not my boss!” and “I’m my own damn wife.” The duo’s electrifying presence on stage shone as Standell-Preston performed “I Felt Love,” creating an enchanting vibe that was felt throughout the crowd.

Standell-Preston said Blue Hawaii has been a joyful experience for her.

“It’s something that we do very quickly, that we do naturally, do very joyfully and do very easily,” Standell-Preston said. “That’s something I definitely value in my working relationship with Agor. Bringing joy and ease to the process and seeing that in the audience where people let go and let their guard down and we let our guard down.”

As their set wound down, the duo began improvising and even performed Britney Spears’ “Toxic,” continuing their ability to create a space of infectious dance to the end.

According to Schalk, the evening was a success.

“Blue Hawaii was really good at reaching the crowd and making everyone feel really comfortable, really empowered and really good about themselves,” Schalk said. “I think that was reflected in the dances that everyone danced.”