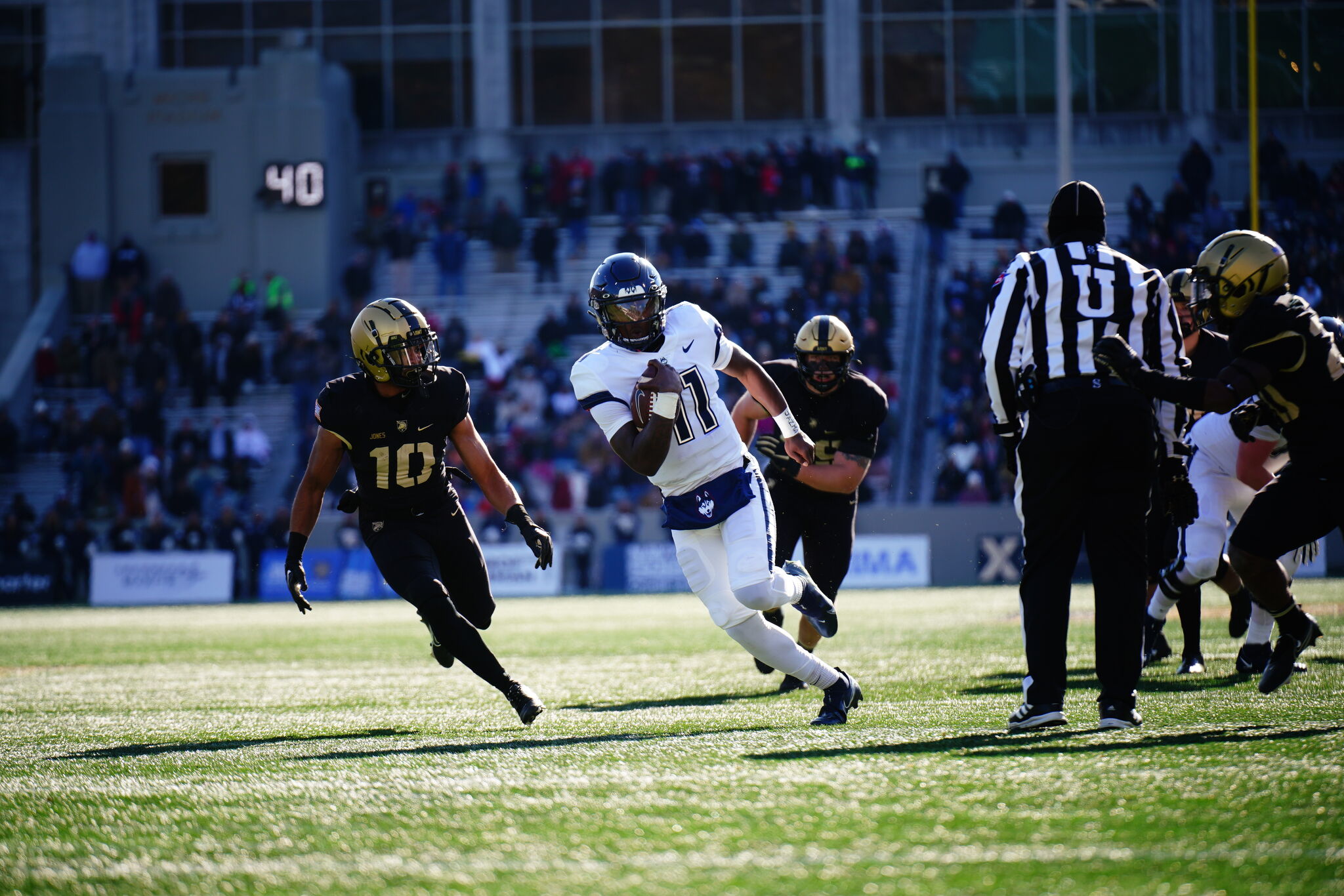 WEST POINT, NY — The UConn soccer team traveled to the US Military Academy on Saturday with the task of capping its regular season with a seventh win in Jim Mora’s inaugural season.

A seventh win would appear to earn the independent program a berth in a postseason bowl. And with an Army team struggling all season, the game seemed winnable.

Instead, the Huskies ended the season with a 34-17 loss and will now wait to see if they’re out when the bowl picture shakes.

“As disappointed as we all are, it’s important that we just take a step back and recognize what these young men have achieved,” Mora said. “This was a team I believe the over/under in Vegas was 2.5 wins, not that I care about Vegas because I don’t but it was printed there. We’re down to six at the moment and hopefully have a chance to play another game.”

UConn finished 6-6, eligible for a bowl berth. But without conference affiliation to contractually tie the program to a bowl game, UConn’s path is complicated.

A seventh win – which would have come on Mora’s 61st birthday on Saturday – was an obvious way to boost the resume as the school argues with Bowl administrators. And things seemed promising as the Huskies took a 17-13 lead midway through the third quarter.

But Army (4-6) scored two touchdowns in the third quarter and added another in the fourth quarter to end the game.

UConn repeatedly got in the way, failing in the red zone and racking up offensive penalties.

“We had 10 penalties on offense, we had two interceptions, we got the ball inside the one (yard line) twice and got three points from it,” Mora said. “We had a punt block for a touchdown and another punt for just 18 yards. A punt with the shaft that went well at the end and we had a penalty on cost us about 30 yards and then we had a 75-yard touchdown run against us in the third quarter. That was the story of the game, we shot ourselves in the foot.”

The loss ends UConn’s three-game winning streak, a streak that included an upset win over Liberty at the national level last week. The team had won five of six after struggling during a daunting early-season schedule that included the Michigan, Syracuse and NC State ranked Power Five programs.

“Not to acknowledge what happened in this team would be a mistake on my part,” Mora said. “Because these men are special. What they went through to get to this point, the COVID year, the years of losing… going through that three game gauntlet fight where we got blown pretty good but man these guys just kept going and never lost the hope. I never once saw them give in.”

The “disappointing loss” sends UConn back to Storrs with question marks about the near future as they eagerly await bowl pick news.

“They have this week off, school is out and then it’s Thanksgiving so they’ll be back next Sunday,” Mora said. “We will meet on Sunday and I would assume we would practice the following week hoping we get a bowl. I don’t know if we’ll get a bowl or not, fingers crossed. I would love to have the chance to go out and fight with these guys again and I know they would appreciate playing together again. I hope we deserve that and if not I can’t tell you. But until the word gets out one way or another, we’re going to go out and practice.”

UConn found themselves in a hole early on at historic Michie Stadium. The team’s first drive ended when a punt was blocked by George Caratan on the Huskies 19 and brought back by Army’s Miles Stewart for a touchdown.

So UConn was only 2:03 behind with a touchdown.

The Huskies rushed for 67 yards in 14 games on their subsequent possession, finishing with a 26-yard field goal from Noe Ruelas after being tucked at the one-yard line.

On his next offensive drive, UConn marched 63 yards in 4:05 in 10 games before being plugged again at the one-yard line, this time at 4th & goal for a turnover on downs.

“We had to do better at the one-yard line,” said UConn true freshman running back and Bristol native Victor Rosa. “I have to get into the end zone for this one game. We just have to perform better. The result should not have been the same as at half-time.”

UConn took the lead early in the second quarter as Rosa rushed for 43 yards for his team-leading ninth touchdown of the season. Rosa ran for 105 yards in the first half and finished with 112 yards to set a new career high.

“Victor (Rosa) was very impressive but it didn’t surprise me,” said Mora. “I probably had to see him play about a year ago and it was Victor right, Victor left, Victor right, Victor left and he got the fuck knocked out of him. He is tough and relentless. He has the ability to stay on his feet. He’s taking a lot of hits, but they’re more of a graze hit and he has a flair for the end zone.”

Despite being three points behind, UConn overtook Army in the first half with 203 rushing yards versus Army’s triple-option 109 yards on the ground. However, the army would break out in the second half.

“We did a good job (against the run) except for. Except for a 75-yard run, except for a 34-yard run, and those are the ones that kill you,” Mora said. “If you’re a really good defense, and we’re moving toward that, you don’t have those ‘except’ plays.”

After UConn’s defense forced a three-and-out on Army’s first drive in the second half, UConn marched 70 yards on a drive that included a 33-yard pass from Zion Turner to Kevens Clervius. UConn scored on Turner’s 1-yard run at 8:33 of the third quarter and seemed poised to take control of the game.

Instead, Army responded with a touchdown as Braheam Murphy ran 75 yards for the score. Army added another touchdown in the third quarter after a run by Tyhier Tyler, who also scored in the fourth quarter.

Turner, the real freshman quarterback, was 14 of 24 for 116 yards and two interceptions.

UConn was penalized 11 times for 78 yards, including seven false starts.

“It’s a very disappointing day for us as a team,” said Mora. “We played well and not today. We really hurt each other. That being said, hats off to the army. It’s a great team and it’s an honor to play on this sacred ground.”

UConn’s last winning season was in 2010, when the Huskies were 8-5 after losing to Oklahoma in Arizona’s New Year’s Day Fiesta Bowl. Head coach Randy Edsall left the program for Maryland after that game, and the team went 15-33 over the next four seasons under Paul Pasqualoni and Bob Diaco.

“Obviously we didn’t want to end up like that, 6-6 is average and we wanted to be 7-5, above average,” Rosa said. “I just want to do that bowl game and get an extra game for our seniors. I love this team and I appreciate my brothers.”

UConn’s last bowl appearance was in 2015 when the Huskies were 6-6 and earned a berth in the St. Petersburg Bowl. UConn lost to Marshall, finishing the season under .500 and setting the stage for a free fall.

The program was 10-50 over the next five seasons, which included Edsall’s failed second term as head coach. Mora was dropped in November 2021 amid the team’s 1-11 season.

Mora’s first season began with a loss at Utah State, but the roster was riddled with injuries in the first half of the season. Turner and Rosa were not expected to contribute as freshmen, but they did enter prominent roles.

“We just put together a good culture and bought in,” said six-year-old UConn linebacker Ian Swenson. “Obviously there’s a lot more to it, the extra work that we put into the weight room and on the field, but I think we just believed in each other and turned our backs on each other.”

“It could be my last game at UConn,” Swenson added. “I’m going to remember the people first, all the people I’ve been fighting with for the past six years. It was a pleasure with everyone. I appreciate all of that.”

The anxious weeks of waiting for bowl selection ahead will not be easy for anyone involved with the program, but regardless of the outcome, this team has consistently exceeded expectations.

“It’s been a great season, after getting through that tough part of the schedule we really got into it and started doing what we promised,” said Rosa. “The Husky Revolution. We were 6-5 going bowling for the first time in a couple of years. It’s great because we said we were going to do it, but 6-6 isn’t how we wanted to finish it.”

Mora said: “I hope UConn Nation, Husky Nation is proud of the direction these players are taking this program. Those are harsh words when you are as disappointed as we are today.”