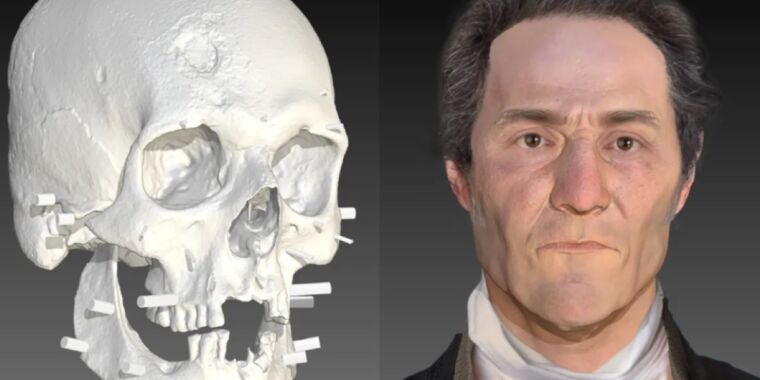 Thanks to the efforts of Parabon NanoLabs and the Armed Forces DNA Identification Laboratory, we now know what the so-called “Connecticut vampire” likely looked like. Using DNA analysis and a 3D scan of the skull, the two labs worked together to digitally reconstruct the face of the 19th-century man whose remains were discovered more than 30 years ago. The image was unveiled earlier this month at the International Symposium on Human Identification conference in Washington, DC. The work also builds on previous DNA analysis to strengthen evidence that the man in question was a former resident named John Barber.

As we previously reported, in 1990 children playing near a gravel pit in Griswold, Connecticut, stumbled upon a pair of skulls that had detached from their graves in an unmarked 19th-century cemetery. Subsequent excavations revealed 27 graves – including that of a middle-aged man identified only by the initials “JB55” written in brass nails on his coffin. Unlike the other burials, his skull and femurs were neatly arranged in the shape of a skull and crossbones, leading archaeologists to conclude the man was suspected of being a “vampire” by his community.

Analysis of JB55’s bones in the 1990s revealed that the man had been a middle-aged laborer, around 55 years old, when he died. The remains also showed evidence of lesions on the ribs, leaving JB55 suffering from a chronic lung disease – most likely tuberculosis, then known as consumption. By the 1800s, it was often fatal due to lack of antibiotics, and symptoms included coughing up blood, jaundice (pale, yellowed skin), red and swollen eyes, and a general appearance of ‘dropping out’. And the disease often spreads to family members. That may be why local folklore suspected some victims to be vampires, rising from the grave to sicken the community they left behind.

During what was known as the vampire panic in New England in the 19th century, it was common for families to dig up the bodies of those who had died of consumption to look for signs of vampirism, a practice known as “therapeutic exhumation.” Fluid blood in the organs (especially the heart), a bloated abdomen, or a relatively fresh corpse were taken as evidence of vampirism. In such cases, the organs were removed and burned, the head sometimes decapitated, and the body reburied. Given JB55’s lung condition and the fact that there were signs of decapitation, he was likely a suspect vampire.

Researchers at the National Museum of Health and Medicine (NMHM) took a sample from one of JB55’s femurs in the early 1990s. The DNA was analyzed, but it was not possible at the time to collect enough information to make a reliable identification. Scientists finally found a likely identifier for JB55 in 2019 using Y-linked DNA profiling and matching the genetic markers to an online genealogy database.