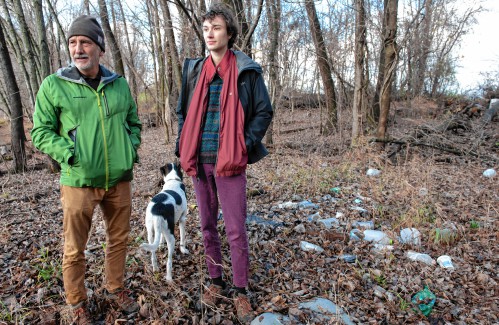 NORTHAMPTON — One piece of trash at a time, Michael Filas is on a mission to clean up the Meadows, a vast property hugging the Connecticut River in Ward 3 where dumping trash is the order of the day.

The 3,000-acre tract of land near Northampton Airport on both sides of the interstate, stretching from the Oxbow to the Calvin Coolidge Bridge, includes some of the city’s most valuable arable land. It’s also a popular area for recreational activities like hiking and bird watching, not to mention homeless camps and a place where young people gather to party. Between all these activities, large amounts of waste end up in the area.

Filas, a 60-year-old professor of English literature at Westfield State University who lives in Northampton, has been picking up rubbish in the area for three years, often accompanied by his son Huxley, his wife Heather and Rafi, the family dog. In just the past few weeks, Filas and his family have removed around 380 pounds of trash from the Meadows, paying for proper disposal alone. Examples of litter discovered in the area include several heavy objects such as computer monitors, refrigerators and even a bathtub.

In a small wooded area by a body of water that connects to the Connecticut River basin, Filas displays a recent find from a garbage truck he found – glass bottles strewn on the ground, a mattress wrapped around a fallen log, and tires in between the fallen leaves.

“It’s pretty certain that along the banks of the Connecticut River, wherever there’s access to the river, there will be bottles and cans with food wrappers and other trash,” he says. “He gets into the bushes and then it takes some effort to pull him out.”

Filas says the idea first came about on a road trip with Huxley to Presque Isle State Park on the shores of Pennsylvania’s Lake Erie. While hiking, they noticed a piece of trash by the water and picked it up. Before they knew it, they had collected a few bags of trash.

“It felt like we left the place better than we found it and we had a good time there together,” Filas said. He likened the activity to looking for shells or pieces of glass on a beach. “You can become obsessive.”

“It’s fun and rewarding to pick up trash,” Huxley said. “That shows what can be achieved.”

Filas held his final cleanup of the Meadows last Saturday, where he was joined by several other community members, including Congressman Lindsay Sabadosa. Filas met Sabadosa while the two were working on the larger Source to Sea cleanup hosted by the Connecticut River Conservancy each September when he told her about his work in the Meadows.

“If you’re going for walks together, picking up trash and trying to figure out which car fits the most trash bags, those are the things you’re talking about,” she said. “And so he got in touch a couple of weeks ago and said if we get a team out there it would be worth the effort before it gets really cold.”

Sabadosa hopes that the cleanup efforts being led by the Filas family will not be as needed by drawing attention to the garbage dumps in the area.

Alexander MacDougall can be reached at [email protected]