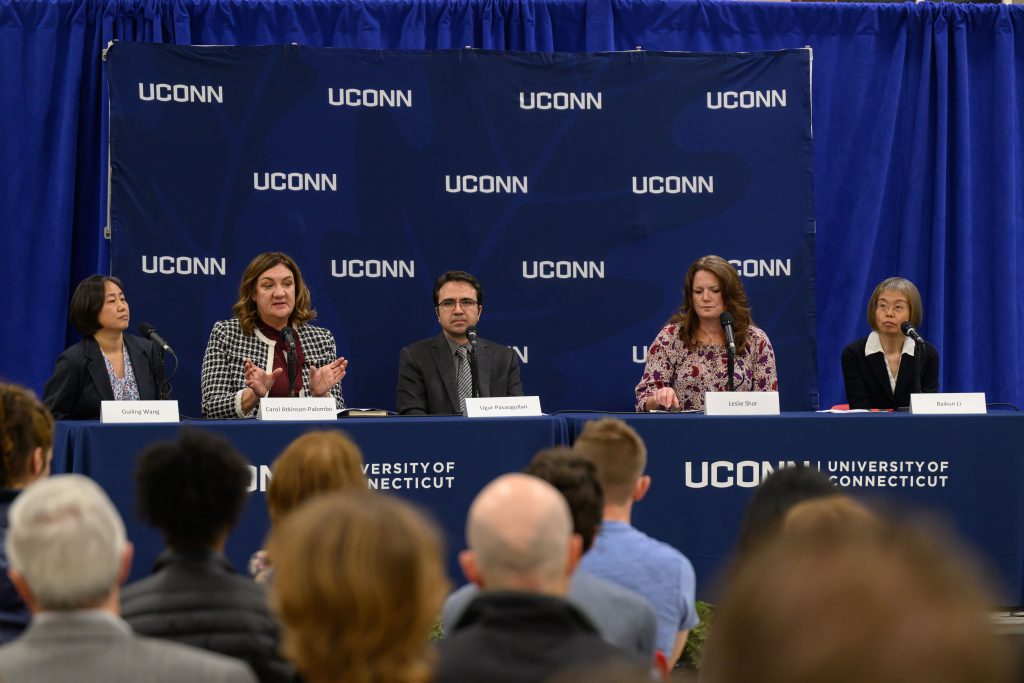 A panel of climate experts from the University of Connecticut discussed how Connecticut could become the Silicon Valley of sustainable energy at a round table in Greenwich on Nov. 16.

“Climate change is a global issue, but politics is local,” and action must be taken at all levels of society to avoid major problems for everyone, said University President Radenka Maric. Maric’s research focused on technological solutions to reduce carbon emissions, the main cause of climate change. In particular, Maric has worked on fuel cells, extremely efficient devices that use the chemical energy of hydrogen or another fuel to generate electricity. Many fuel cells can also run in reverse and store electricity as chemical energy.

UConn will be installing multiple fuel cells on campus this year, building on the success of the fuel cell power plant originally installed on the depot campus in April 2012. This fuel cell provided the depot with heat,

Refrigeration and power for nearly a decade.

“Ten years ago we installed a fuel cell in front of our building. At the time there was skepticism: “Will this just be a lawn ornament?” Now the university is installing ten more because everyone can see that they work,” said Ugur Pasaogullari, director of the UConn Center for Clean Energy Engineering.

A new 460 kW fuel cell was installed earlier this year to replace the original 400 kW cell at the Depot Campus.

In addition to providing heat, air conditioning and power on campus, the new fuel cells will also help the state learn best practices for distributing the technology on a local grid, Pasaogullari said, responding to a question from Connecticut’s former independent gubernatorial candidate, Robert Hotaling ’01 (DE). The distributed fuel cells are just one of many initiatives the university is taking with the Eversource Energy Center to help plan the state’s future low-carbon power grid.

Expanding and improving the power grid has gained urgency now as Connecticut develops offshore wind projects. Integrating large, intermittent generation sources can put a strain on other parts of the grid that need to balance that power. It can also put a strain on local communities, as Carol Atkinson-Palombo, a professor in the Department of Geography, pointed out.

“The connection to the power grid, the construction, the cables … all of these things can disrupt communities,” Atkinson-Palombo said. Figuring out how to integrate these big new renewable developments into the grid isn’t just the job of engineers. The people in the affected communities have to like and want the project, otherwise it won’t happen.

“There are many opportunities in the social sciences and humanities,” Atkinson-Palombo said, in addition to engineering. “The implementation of technology is just as important as its development.”

People gifted in the arts—graphic and industrial design, presentation and public speaking and advocacy—will all have a role to play in helping Connecticut adapt to climate change and transition its economy to a clean energy-based one economy, UConn civil and environmental engineer Baikun added Li.

Li and fellow engineers Guiling Wang and Leslie Shor discussed challenges related to drought, agriculture and water wise use in Connecticut, as well as UConn’s new climate science minor and opportunities for all high school, college and university students to participate in research and gain work experience before the bachelor’s degree in the field.

“A lot of the jobs are born here in Connecticut,” Pasaogullari said. “We have the knowledge, the companies, the supply chain – we could be the next Silicon Valley of energy.”