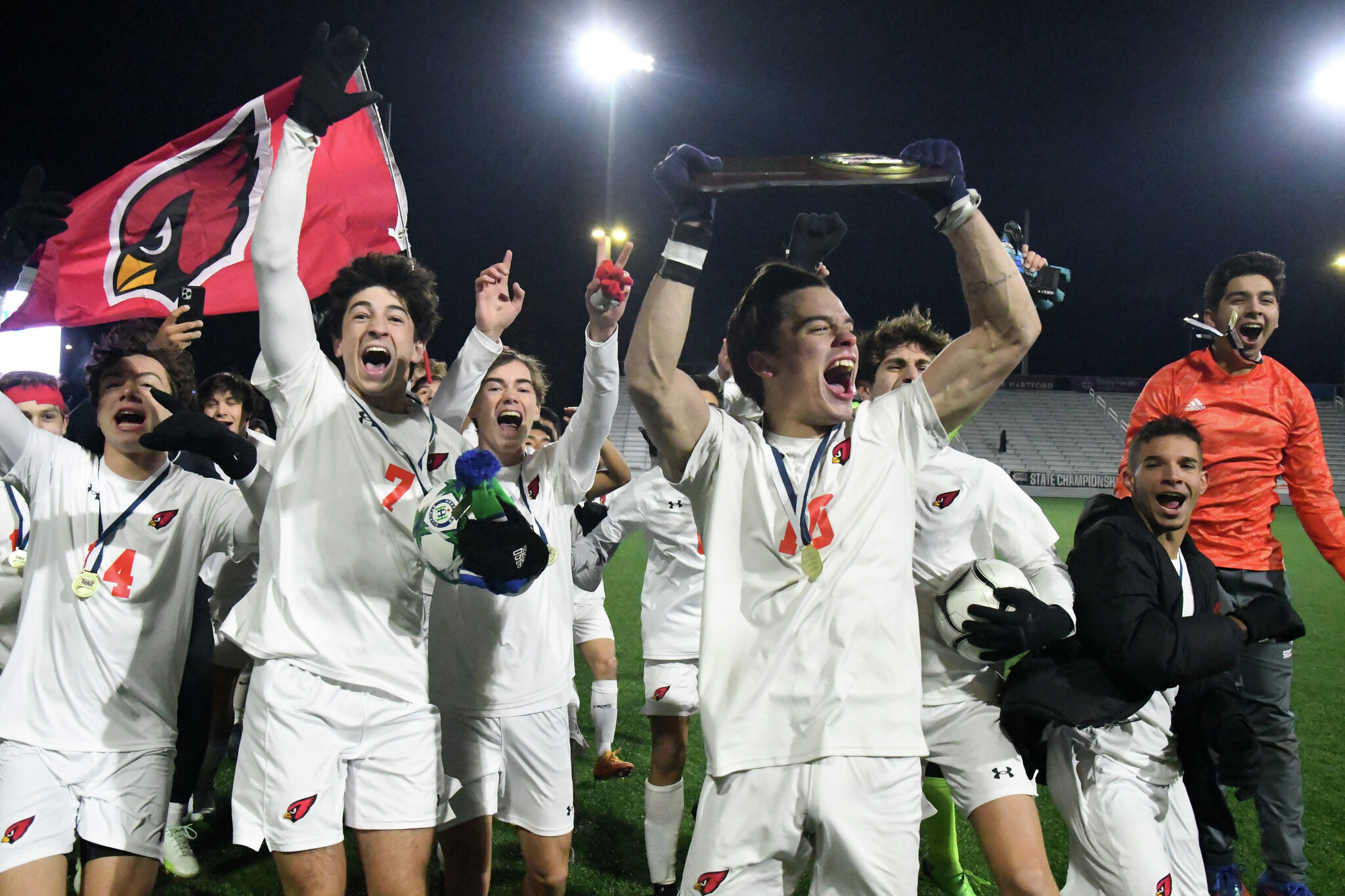 HARTFORD – The long wait for the Greenwich boys’ football program is over.

State champions for the first time since 1961, the Greenwich boys’ football team completed one of the most unlikely runs through a state tournament with a 3-2 (4-3 PKs) win over Hall in the CIAC Class LL title game.

The 16th-seeded Cardinals had to beat defending champion Farmington, 1st-seeded Trumbull and finally what is considered by most to be the best team in the state, 2nd-seeded Hall.

And the Cardinals did it, winning all of those games, as well as their semifinal win over Fairfield Prep, on penalties.

“‘I’ve never been involved in anything like this before. Four penalty shootouts, that’s unbelievable,” said Greenwich coach Kurt Putnam. “It’s what you always dream of. So few coaches ever get the chance. For us to get something like that and in the thing we did it in. A 16th Ranked team playing against a team that beat us in the regular season. Tore us to pieces. To turn that around in a state finals shows how hard these kids worked.”

Hall took an early lead and scored in the 12th minute when Lucas Almeida fed Sam Sandler the goal.

Greenwich settled down after that initial barrage and eventually tied the game with a Maximo Ferrario goal six minutes into the second half.

The Cardinals would take the lead on another Ferrario goal, this time assisted by Lucas Luzuriaga.

Hall would equalize when Sandler sent a ball on goal which a Greenwich defender accidentally kicked in and the game was evened 2-2, 17-15.

The teams would go through two goalless overtimes and set up the first CIAC Championship game, which was decided by penalties.

Hall made three, with one sailing over goal and one being stopped by Greenwich keeper Nico Figueroa.

Greenwich made four and sent one over the bar, but after Luzuriaga hit the last kicker, he sprinted towards the Greenwich fans, who rushed the field to cheer.

“I can not believe it. Greenwich won a State Cup in 1961 and now we’re finally bringing it home,” said Ferrario. “I missed my last two PKs and was very scared and focused on making contact and I knew if I did it would go in.”

Hall, who won the Class LL Championship over Greenwich in 2019, is ending another undefeated season on PKs in the state tournament after being eliminated the same way in 2021.

“We haven’t lost in regulation in over 60 games. Last year we got rebounded on penalties and his year we got rebounded on penalties,” said Hall coach Zeke Seguro. “It’s tough. All the credit goes to Greenwich. They came here, played hard and did what they had to do. My guys showed a lot of perseverance and they could grind. It wasn’t easy. We prepared the guys really well, but we did didn’t miss our chances.”

PLAYER OF THE GAME

Maximo Ferrario, Greenwich: With two goals and a converted penalty, Ferrario was named MVP of the game.

“It wasn’t an easy road to get to the final,” said Ferrario. “We kept pushing and never gave up. I’ve never been part of a team like this, it’s something special.”