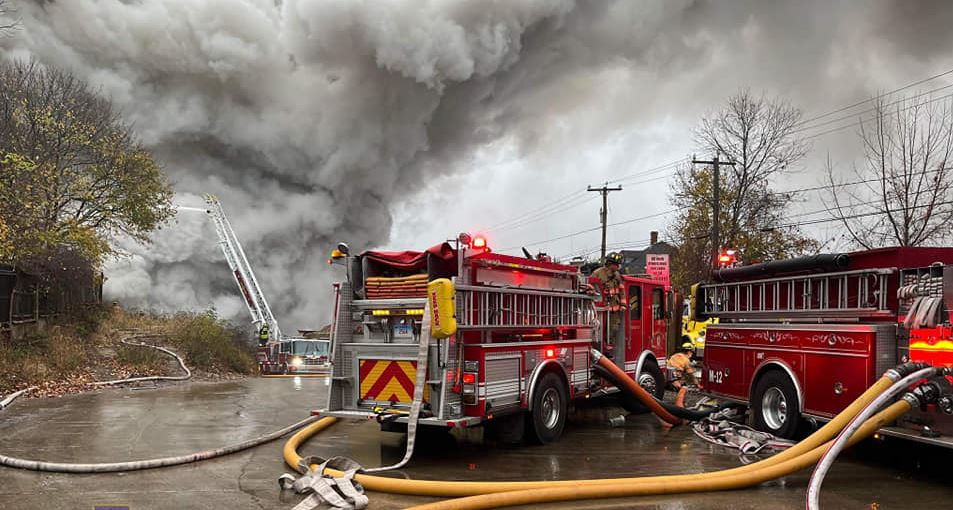 Crews from about a dozen cities helped local firefighters fight the Connecticut Scrap fire on Pequot Road in the Uncasville neighborhood. They even came from Ashaway, RI, according to the Mohegan Fire Company, one of four volunteer fire departments in Montville.

“Everyone did a fantastic job, they have everything under control,” Mayor Ronald K. McDaniel said Thursday.

He said there were a few minor injuries among the firefighters – one tripped over a hose, for example – but nothing serious.

Much additional manpower and equipment was required not only because of the size of the fire, but also because of the way crews fought it: There is no municipal water or hydrants in the area, so they had to truck in water and dump it into temporary pools and pump it out, McDaniel said.

Junkyard fires take longer to put out because they often start deep in the garbage heap, he said.

“It’s a junkyard. It starts at the bottom of the pile, you have to move the whole pile,” McDaniel said, “to get to the flames, with heavy machinery operators pulling the pieces of scrap apart.

Workers from the state environmental protection agency were at the scene of the fire all day, testing both water and air and finding no measurable amount of contamination, said Paul Copleman, spokesman for the Department of Energy and Environmental Protection.

“We monitored the water that ran off as firefighters tried to put out the blaze and had aerial surveillance equipment to monitor the smoke from the fire,” Copleman said. “We used air monitors all day, testing for volatile organic compounds (VOCs) and carbon monoxide. We found no measurable contamination in our tests.”

This is Connecticut Scrap’s second major fire in two years, and McDaniel said residents are calling his office and asking him to close the shop. The owner could not be reached for comment Thursday afternoon.

However, McDaniel said the city has no plans to take action on Connecticut scrap, and he said there are no plans to discuss the deal at a meeting.

“They don’t really work in an unsafe way,” he said. “Unfortunately, that kind of thing happens in the scrap business.”

He said he didn’t know the cause of the fire early Thursday afternoon. Fire Marshal Paul Barnes could not be reached for updates on the investigation.

Christine Dempsey can be reached at [email protected]