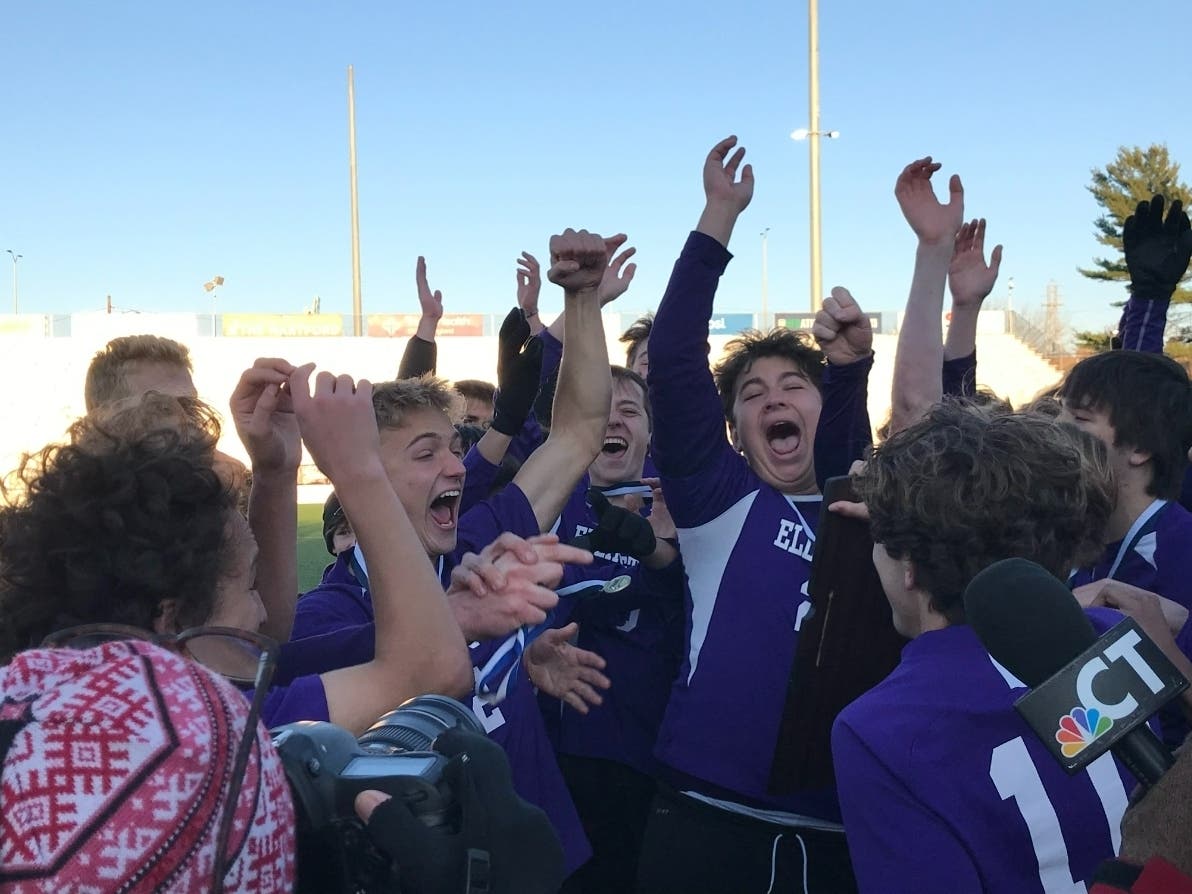 But that was little consolation for the Knights, who were staring at a heartbreaking 1-0 loss in Saturday’s CIAC Class M state championship game to the Weston Trojans.

But that didn’t happen.

And after intense play and great drama, the EHS Knights took the proverbial monkey off their back and won a hard-fought, if not miraculous, state title 2-1.

With almost 3 minutes to go, Ellington senior Ethan Mallett took a pass from senior Andrew Velasquez and tied the game up with a powerful shot that settled in the lower right of Weston’s goal, past Weston goalkeeper Edward Maglione.

The clock went back to “0” and additional time was required.

As Mallett explained after the game, the ball bounced around in front of Weston’s goal and eventually landed at his feet.

“I knew that keeper’s bottom right, he wasn’t going to save it,” said an ecstatic Mallett after the game. “It feels incredible. It feels great to prove some people wrong.”

After Mallett’s miracle, Ellington senior star Owen Hoffman was brought down in the penalty area in extra time, clearly resulting in a penalty kick two minutes from time in the first extra time.

Hoffman calmly buried the shot and rolled it to the right side of goal while Maglione dived right to cover the left side of goal.

He said amid the post-game celebrations that he’s Ellington’s man when it comes to taking PKs.

“I usually take penalties for this team, so I knew I had to step up,” said Hoffman, who was named the game’s MVP.

Hoffman said his cheeky, slow-rolling shot to the keeper’s left was planned as he shot for accuracy, not power.

“I usually try to place it on the corner, and luckily he guessed right,” Hoffman said.

It put Ellington 2-1 up and had them dreaming of a state championship that ended a drought that saw them reach and lose the state finals every year since 2018.

Hoffman’s penalty sent the crowd into hysterics and eventually fear – for Weston, fear of loss, for Ellington, fear of missing a huge opportunity to make amends.

The day’s drama had fans on both sides standing in the wind during extra time, trying to score a championship-winning goal, one that came via an obvious takedown and a clean penalty.

For Ellington, it was to be a frustrated Weston desperately trying to equalize that would have led to penalties.

The 2022 tournament marked the return of penalty shootouts, used to determine a defending champion if necessary, and ended the previous practice of ‘co-champions’, an unsatisfactory outcome for teams after struggling on the field full-time and overtime.

In the end, PKs weren’t needed, though not without a tense moment when Ellington goaltender Cole Leavitt snapped a header with 50 seconds left.

After a scoreless first half that saw Weston repeatedly push into Ellington territory, with the Knights also having their moments, the scoring began.

Weston student Casper Leary ended a narrow 0-0 draw with 26 minutes remaining in the second half with a beautiful goal down the right, ending a three-for-two break with senior Spencer Quinn providing the assist.

The beautiful goal gave Weston a 1-0 lead, potentially driving another dagger into the hearts of Ellington.

Late in the game and before Mallett’s miracle, Weston just missed a scoring chance that would likely have given the Trojans a state title when a shot went just wide.

Ellington last won the state title in 2014 but has been runner-up in every state title game since 2018.

Get more local news straight to your inbox. Sign up for free patch newsletters and alerts.