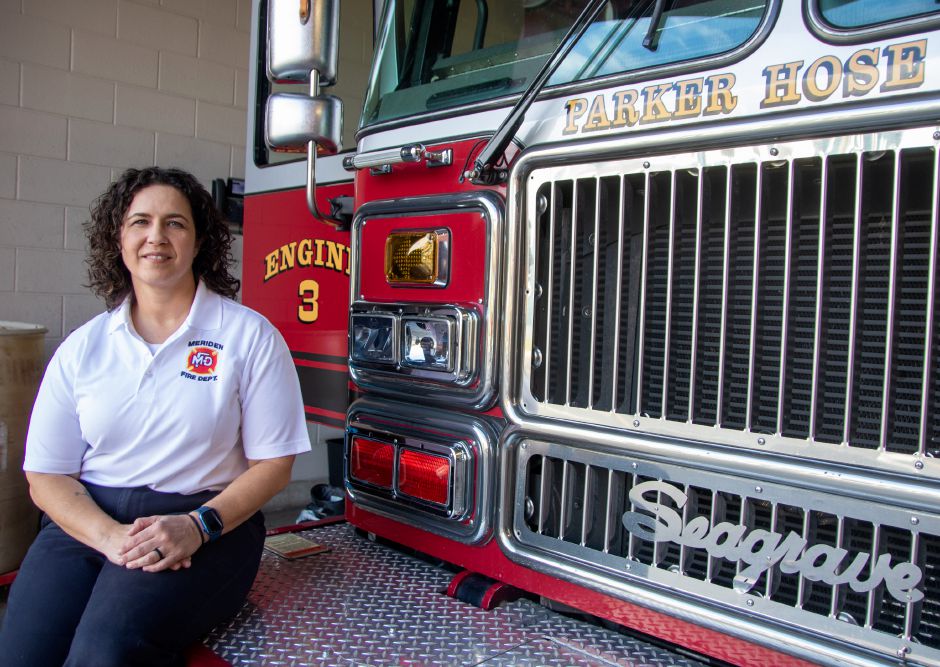 A Record Journal feature focused on Cristina Schoeck, the first Latina and first woman to hold the position of deputy fire chief since the Meriden Fire Department was founded in 1851. “It’s really good for young women to see that there are women in the fire service and that we can move up,” said Schoeck. “The same goes for the Hispanic community, they can see that firefighting is a good career, especially here in America where we have a large population of Latinos and that’s something they should consider.”

With Thanksgiving just around the corner, area pantries are preparing to serve large numbers of families. Inflation has made life difficult for many. “Due to inflation, we’ve found that seniors are struggling to buy groceries,” said Sarah Santora, director of community programs at Connecticut Foodshare. “They have a steady income and the cost of living is high.”

Ron and Nancy Serafino were honored for their community service during the YMCA’s Forever in Blue Jeans fundraiser at the Aqua Turf Club in Southington on Friday night. The Serafinos received the YMCA’s Compass Award earlier this year, which recognizes giving back to the community. Serafino Pharmacy existed on North Main Street from 1974 until it closed last year.

A recount following a six-vote lead by Democrat Chris Poulos over Republican Tony Morrison in the 81st House race ended in a single-vote win for Poulos. Poulos praised election workers for an “absolutely professional” handling of ballot papers.

Fourth graders in Amie Alfano’s class at Mary G. Fritz School in Wallingford participated in the Ruby Bridges Walk to School Day, which honors the civil rights activist who became the first black child to abolish William Frantz Elementary School in Louisiana in 1960. “I was a member of the Wallingford Diversity, Equity and Inclusion Committee for a couple of years and I got an email from the Ruby Bridges Foundation and I thought it would be a great opportunity to hold the kids accountable pulling to feel a part of something bigger,” said Alfano.

Tony Terzi, a veteran television journalist, is Meriden’s new Strategic Communications Director. A native of Meriden, Terzi attended Nathan Hall Elementary School before his family moved to Southington. “…there will be different ways we’re going to try to simplify things for the public to make sure things that they need to know and want to know are easy to understand,” said Terzi, who now lives in Wallingford.

Wallingford City Councilor Jazon Zandri, his wife and another family are suing the administration at Wilcox Technical High School in Meriden, saying the rights of his daughter and other students have been violated because they do not have a certified math teacher in their geometry class. Frances Rabinowitz, executive director of the Connecticut Association of Public School Superintendents, told the Record-Journal that the shortage “is more acute this year than it has ever been. Math teachers in particular are in short supply.”

A West Main Street repaving project had its problems. John Benigni, executive director of the Meriden YMCA, told the Record-Journal that people are avoiding downtown. “Our numbers are going down because people are skipping their workouts because it’s too crowded. And parking (on Butler Street) is a nightmare.” Public Information Officer Darrin McKay said: “Obviously, as with any paving project, it’s congested. We had problems with people stopping on the train tracks.” Mayor Kevin Scarpati expressed concern about the two-way traffic plan that follows the redevelopment. “We need to educate a lot more about what it’s going to be like and what the end result is going to be like,” he said. “It’s more confusing to explain than to drive. It will certainly be a learning curve for people coming downtown.”